Four different White-tailed Eagles died in the Duna-Dráva National Park in the past few weeks, probably due to poisoning – as the NP Directorate reported to the MTI. 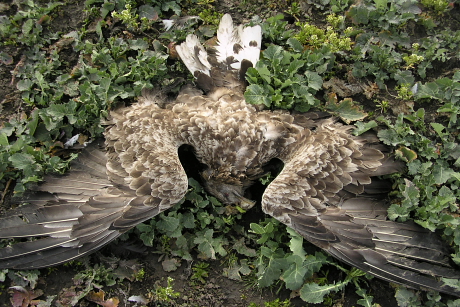 The NP Directorate suspects that local farmers put out poisoned baits trying to protect their livestock against predators and the White-tailed Eagles probably ate from those.

If poisoning proved to be the reason behind their deaths, it would be a criminal act causing damage to nature. Toxicological examination is still underway.

As the director stressed: Other things could cause their deaths, as well. Numbers of rodents increased due to mild weather last year. Rodenticides, used against them, can accumulate in the Eagles’ body and cause fatal poisoning. During long and severe winters, the Eagles’ condition weakens and even low level of toxicity, parasites or bacteria can lead to their death.

Only some of them are found eventually, several times the abandoned nests indicate the owners’ mortality.

The White-tailed Eagle is the biggest raptor in Hungary, it is strictly protected and has a nature conservation value of one million forints.