On May 4th, an Imperial Eagle chick hatched in the Great Bustard Rescue Centre at Dévaványa in the the Körös-Maros National Park. The egg was rescued from an abandoned nest ten days ago by associates of the national park. The eight-day-old chick was then placed to a nest of its future foster parents on May 13th, close to the Eagle Centre in the Jászság.

The KMNPD is a partner organization of the HELICON LIFE+ programme, and volunteers were guarding a nest in the area of the GB Rescue Centre. Unfortunately, the breeding attempt was not successful, the volunteers reported on April 24th that the female was not around the nest. Associates of the national park waited out the necessary time defined by the protocol in such cases, and then removed both eggs from the nest and delivered them to the Centre, where they were put in incubators. Although, one of the eggs was too weak and the embryo died, the other one survived and hatched on May 4th, and was named “Kelemen”. Past years, there have been four Imperial Eagle chicks that hatched and raised in the Centre, as nowhere else in the country.

Experts picked a pair in the Jászság, which did not have any chicks in the past few years, probably due to one of the parents being infertile. Therefore, the chick will have a great chance to survive. The nest is guarded till the fledging in July.

“Kelemen” was in great shape on the day of moving to his new home, the Eagle Centre, sue to the experts of the KMNPD. The chick ate his fill in front of the press, and then he was taken to the nest chosen earlier. As expected, two eggs were found in the nest, which were tested with a special equipment of the KMNPD. Both turned out to be dead, and most likely there were not live embryos in them. “Kelemen” was placed in the nest with one of the eggs while the other one was taken to further examinations. 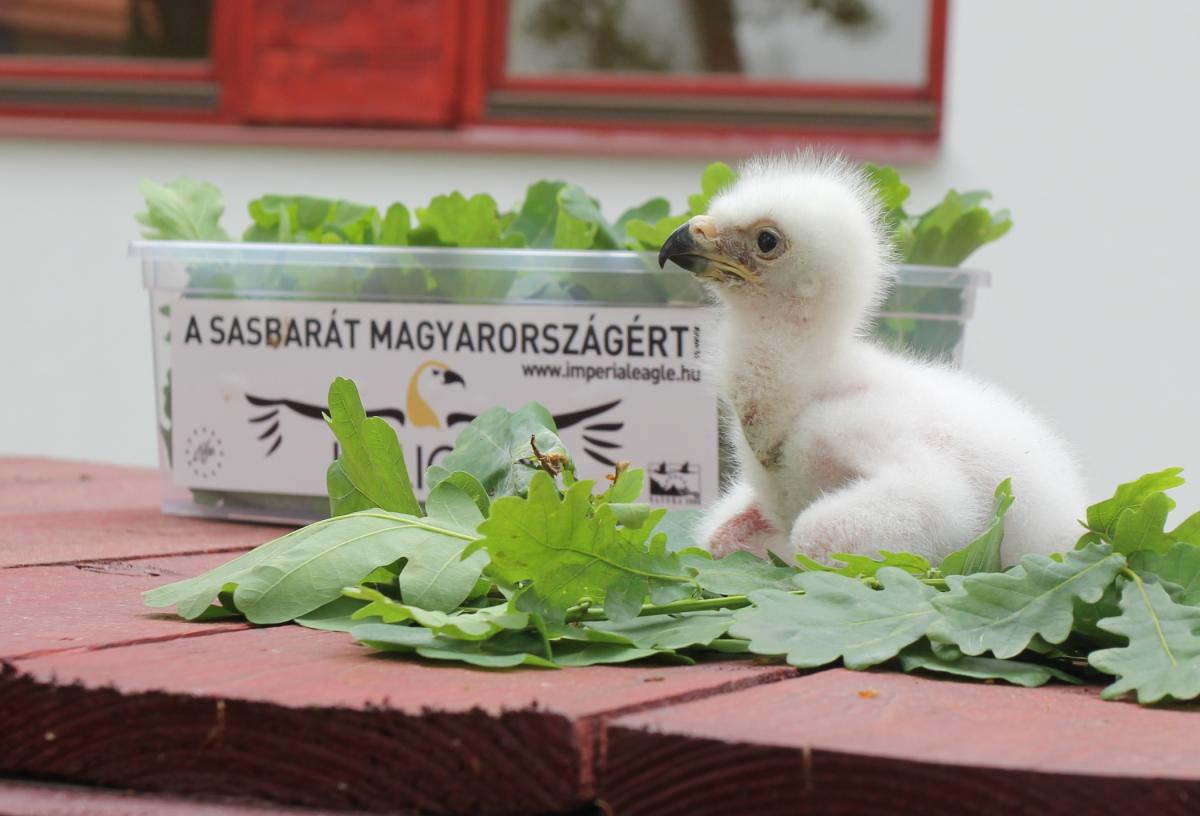 "Kelemen" makes an appearance to the press, ... 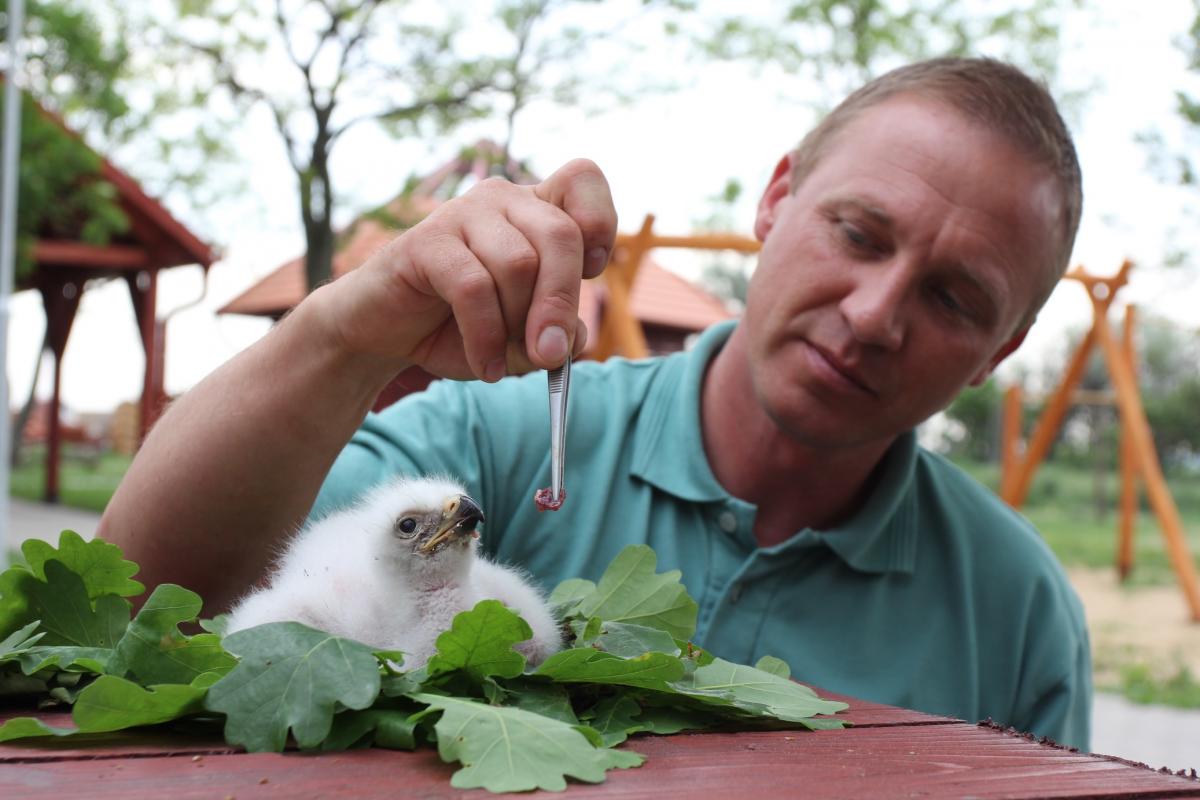 ... and eats some more to have some reserve during the first few hours in the nest. 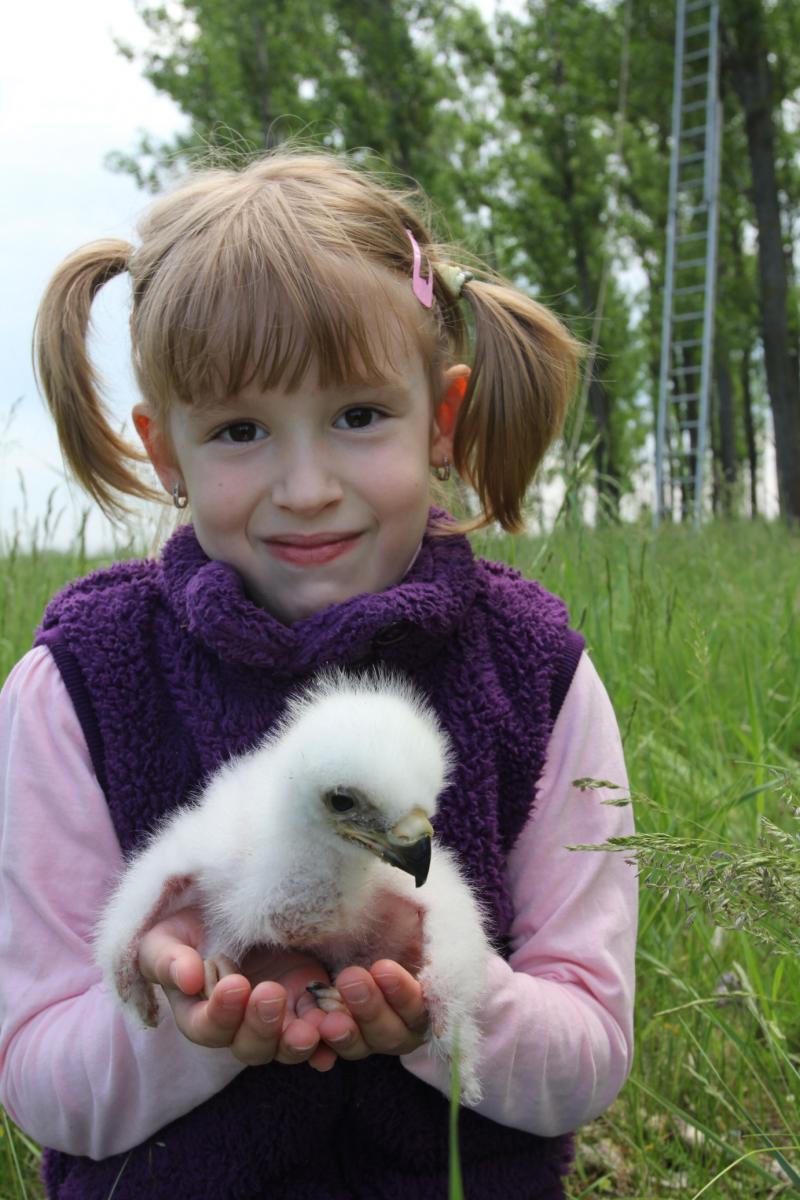 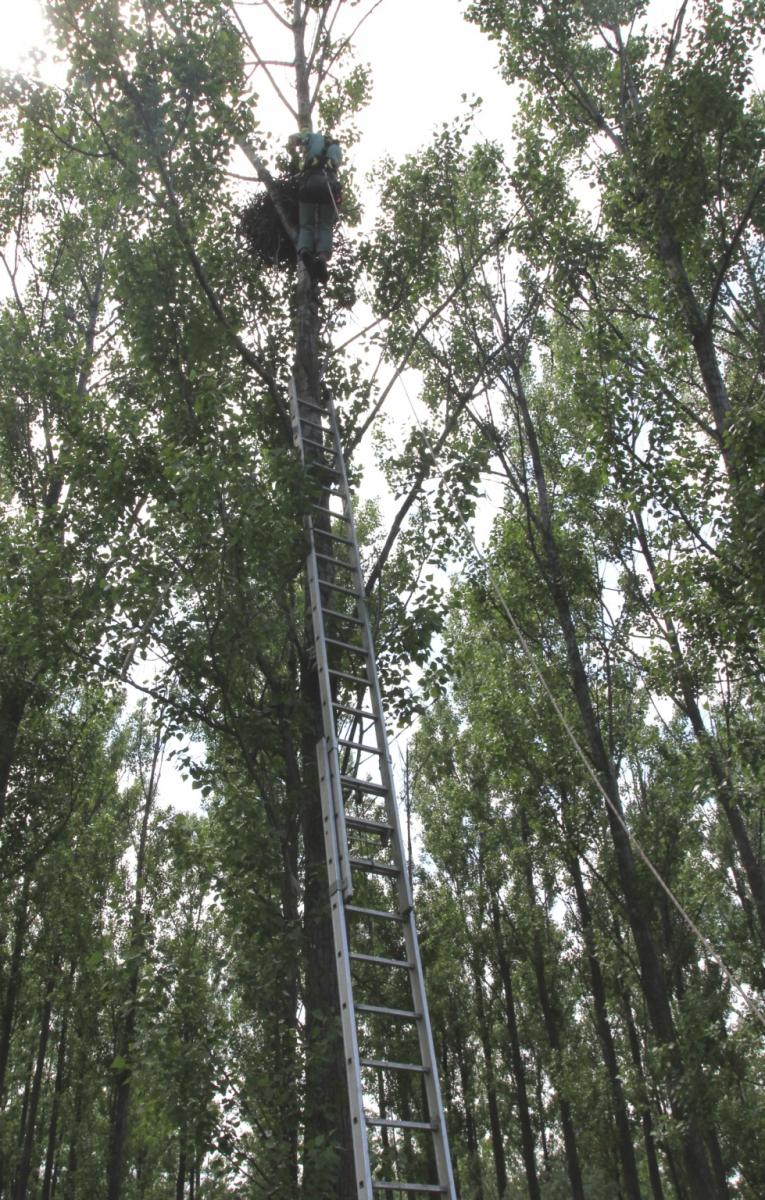 ... until being placed in the nest. 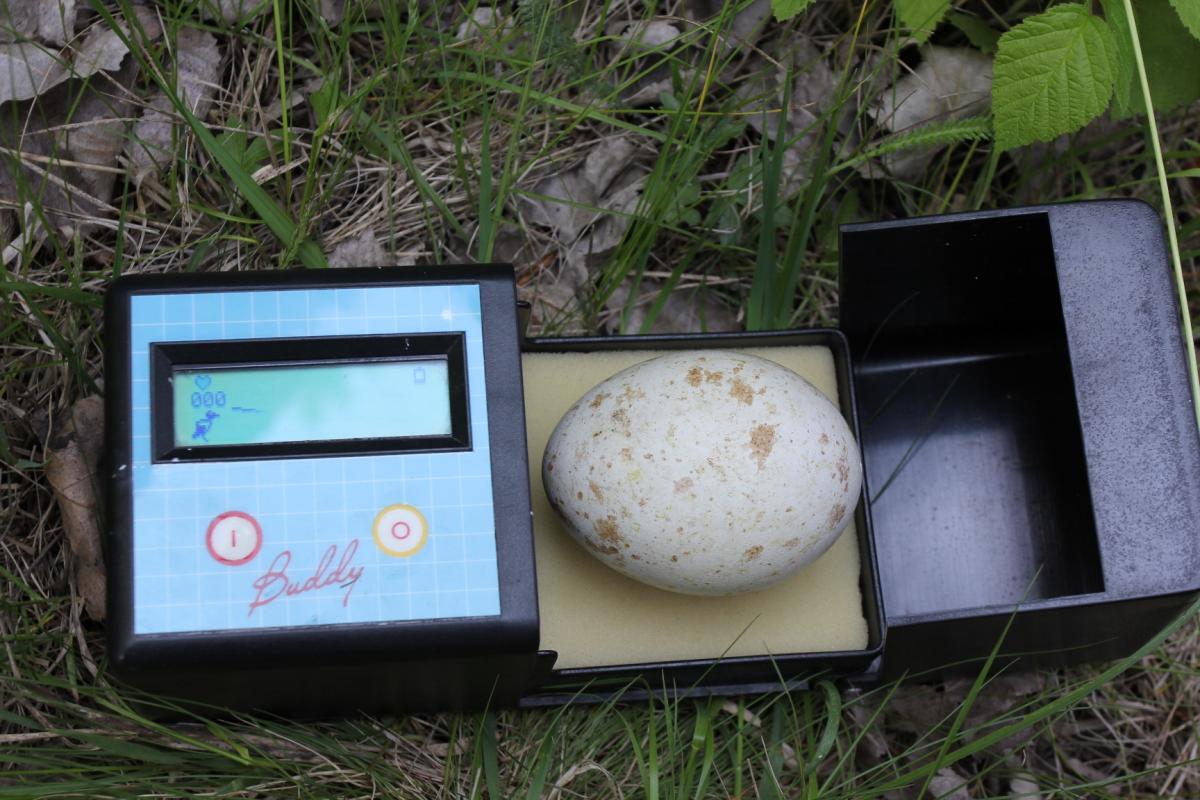 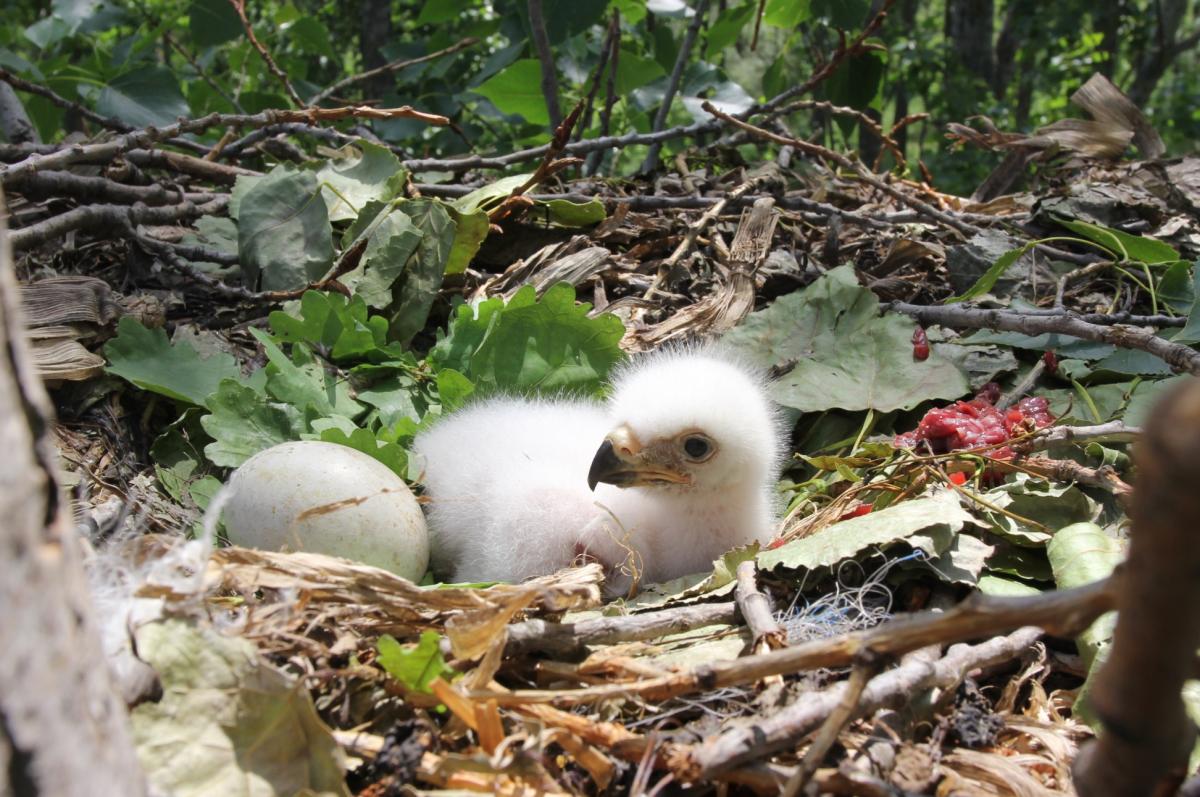 "Kelemen" already in the nest with one of the dead eggs. (Photo: Tibor Juhász).

Experts of MME have started watching and guarding the nest immediately, and were delighted by the female returning to the nest within 15 minutes, which she has not left since then. A little later, the male visited the newcomer. Based on what was seen, “Kelemen” has as much chance to grow up and fledge, as if he was born in a natural nest instead an incubator.

Actions demanding such high capacity needs can only employed in cases of strictly protected species, whose populations decreased to a level, where every individual considers to be important in order to save the species and maintain high genetic diversity.

Most astonishing area of application of this method is to prevent the phenomena called “cainism” among certain eagle species, namely the Lesser Spotted Eagle in Hungary. Utilizing this method, the number of fledging chicks can be doubled. “Cainism” means that the normally stronger chick in the nest, usually containing two chicks, oppresses its younger brother to the point, when that starves to death. Conservationists later realized that fratricide only occurred during a two-week period. If the stronger chick was taken from the nest and reared artificially during this time, and then put back to the nest, the siblings would live comfortably together giving chance for two chicks to fledge.

Cases, such as this one, are necessary for the raptor biologists to learn a great deal about incubation, rearing, returning the chick to the nest and the techniques of checking up. Information learnt and shared in publications are inevitable in saving other globally threatened species.