After summing up the data of the 9th National Eagle Count results show that the wintering numbers of Eagles have not changed much since last year. The Count was organized by MME and was done in collaboration with other NGOs and Directorates of National Parks. 241 participants covered about 11,500 square kilometers, which included all the important wintering areas of all the Eagles species. 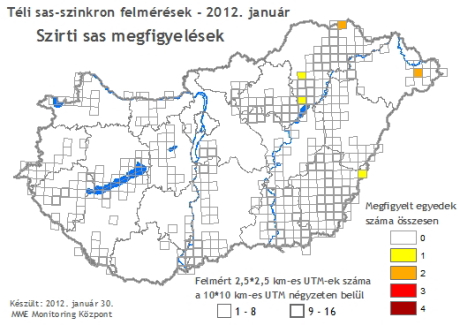 Observations of the Golden Eagle. 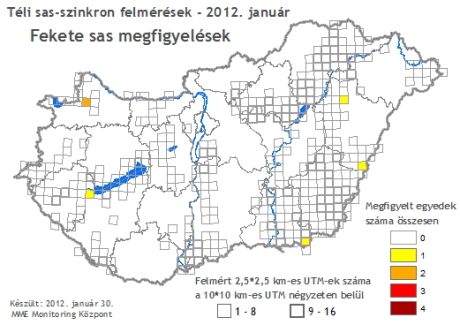 Observations of the Spotted Eagle. 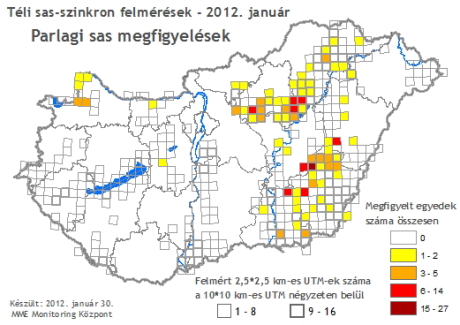 Last year’s Count delivered similar results having counted 475 White-tailed Eagles, 170 Imperial Eagles, 1 Golden Eagles and 3 Spotted Eagles in 10,000 square kilometers area, so the average “eagle-density’ was almost the same in both years. Lowlands and wetlands of Hungary provide suitable wintering habitat for the Eagles coming from other countries, which was proved by ringing data. We have Imperial Eagles from Slovakia and White-tailed Eagles from northern (Scandinavian and Baltic) populations. Therefore, it is very important to stop any further persecution of Birds of Prey. MME reported about another two Imperial Eagles found dead by poison a week ago, which amounts to 50 poisoned Imperial Eagles in Hungary already. 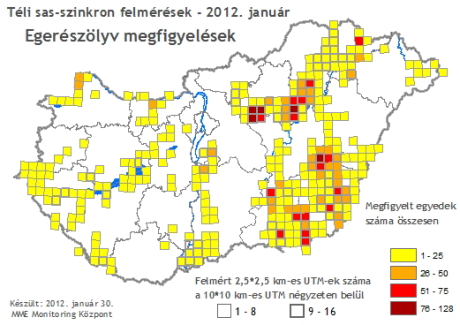 Observations of the Common Buzzard. 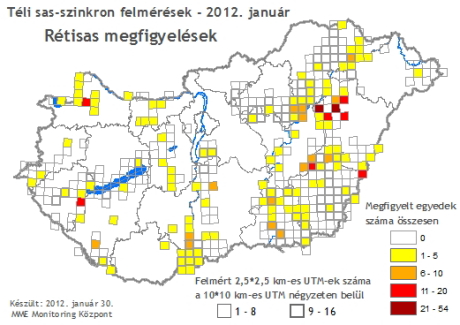 Conservation experts participating in the Count also recorded all the other Raptor species seen during the survey. The Common Buzzard (Bird of the Year) proved to be the most numerous with the total of 5183 individuals. Total numbers of other species were: 997 Hen Harriers, 679 Common Kestrels, 316 Rough-legged Buzzards, 121 Eurasian Sparrowhawks, 42 Saker Falcons, 28 Merlins, 17 of both Peregrines and Goshawks, 13 Long-legged Buzzards and 4 Red Kites. Interestingly, Marsh Harriers showed in quite good numbers despite their rareness during winter and also an odd Black Kite was among the highlights.

We would like to say thank you for every participant, members of MME and staff of the National Parks!