Following eagles in the Balkans

We had two main aims when we visited the countries of the Western Balkans. On the one hand, we intended to establish contacts there with conservationists to have a better picture about the significance of poisoning in these areas, so that we can calculate the probability of Imperial Eagles getting into trouble by this threat, and on the other hand, we helped wrapping up the Moustached Warbler expeditions organized by the Izsáki Bird Observatory and the Kiskunsági Bird Conservation Organization in the past twelve years.

We planned to visit all those areas in Albania and Macedonia marked by our satellite-tracked Imperial Eagles and to talk with local conservationists about poisoning. Above all, our most important task was to try to find “Berci”, the Imperial Eagle marked in the Zemplén Hills in 2014, and whose transmitter had not sent signals for weeks while the last ones came from Macedonia. Therefore we had a bad feeling that he died there. Besides, “Vasvári”, another Imperial Eagle tagged in Hungary, also spent the winter here, as well as “Gabi” before leaving for North-Africa. Other Macedonian Imperial Eagles, namely “Viktorija”, “Filip” and “Jana”, satellite-tagged by Hungarian experts in 2013 have still been in the region.

Our first stop was in the Neretva Delta where we picked up the equipment of this year’s expedition. From here, we went to Montenegro and spent a day with associates of the Montenegro Bird Conservation Organization near the salt pans of Ulcinj. Illegal shooting of waterfowl and raptors posed a serious threat in this area 15 years ago. Fortunately, due to volunteer effort and better regulations this problem was reduced to a minimum. Our colleagues stated that poisoning was not a widespread threat in the country. The only case they could mention is when two Griffon Vultures fell victims to poisoning. 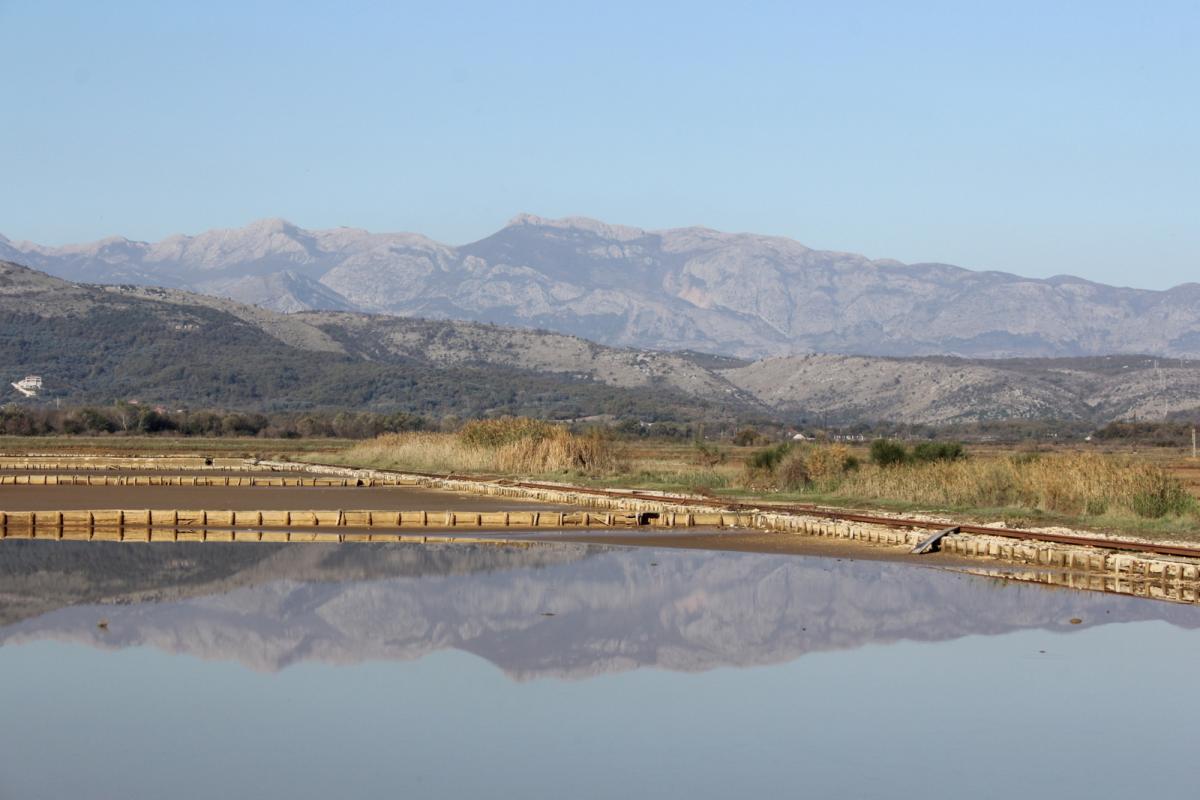 Northern Albania was our next stop, where we closed the first bird-ringing camp after working for a few days. We had kept searching for eagles for days, and we concluded that this region is a prime foraging area of Golden Eagles. They use rocky formations emerging above the lowlands for roosting and leave for the agricultural habitats from here. During our search we also saw an immature Imperial Eagle. Today, hunting is banned nationwide in the next two years. In the past, uncontrolled, illegal killing of birds devastated severely bird populations. Despite this, illegal shootings have not stopped entirely, therefore this poses the biggest threat to raptors in the country. Since livestock farming is widespread, farmers try to defend their animals by any means and the information, we collected, shows that poisoning is common, however, its dimension and effect on raptors are unknown. 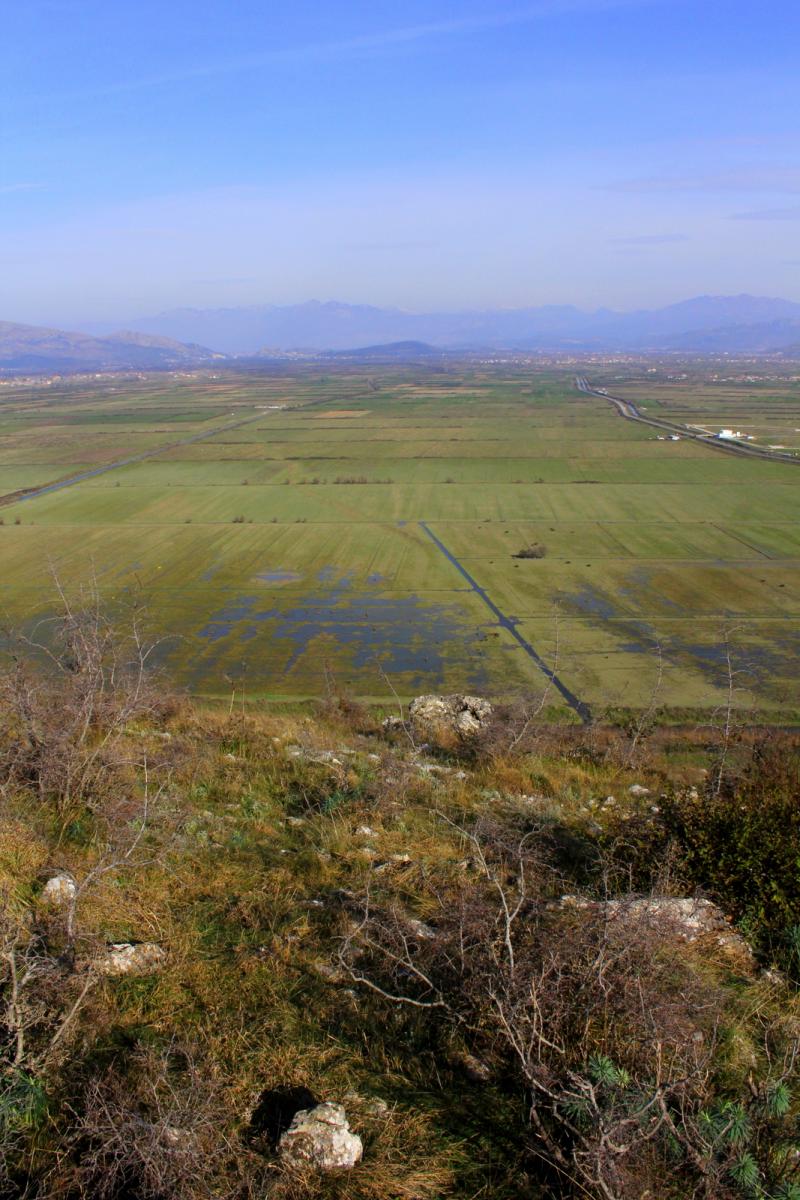 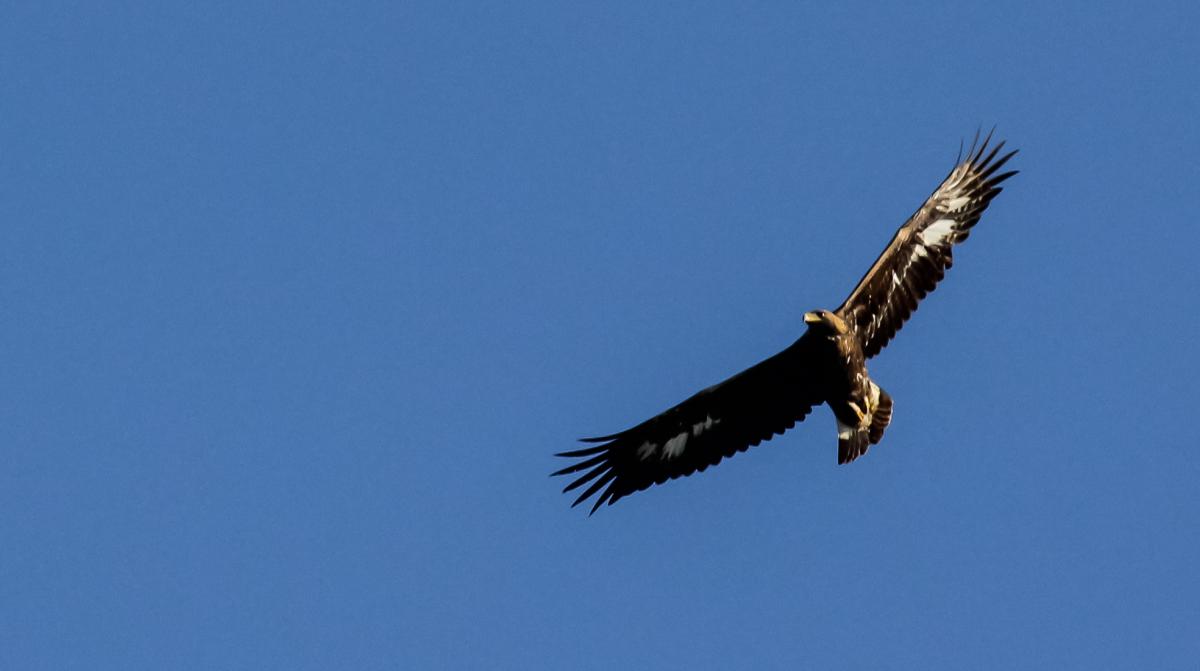 After packing up the camp we continued to Macedonia through Central-Albania. The inner part of the country did not seem to be suitable for eagles, however, heading towards the east and reaching the foothills, more Golden Eagles were spotted. This region holds exceptional numbers of sheep, that is why the high possibility of shooting and poisoning.

In Macedonia, we followed Berci’s tracks. Emanuel Lisichanets, coordinator of the conservation work on Imperial Eagles in the country, an associate of the Macedonian Aquila organization, also joined to help us. The tracks led us to a foothill near the Pelagonian Heights. We searched thoroughly the rocky hillside in the next few hours but we couldn’t find neither the transmitter nor the eagle. It was quite good news, since we could be sure that probably the transmitter went wrong and the eagle was still alive. Moreover, the area drawn by his signals was new to our Macedonian colleagues as Imperial Eagle foraging habitat, and it proved to be worthy to keep an eye on it in the future. Although, there are no data about breeding attempts here, this wintering data supports the belief that the agricultural areas in the area are good foraging habitats, but not suitable for breeding lacking any trees. Goal of a future conservation project could be the establishment of such nesting habitats by either putting up artificial platforms on high voltage pylons or planting and protecting trees on the long run. 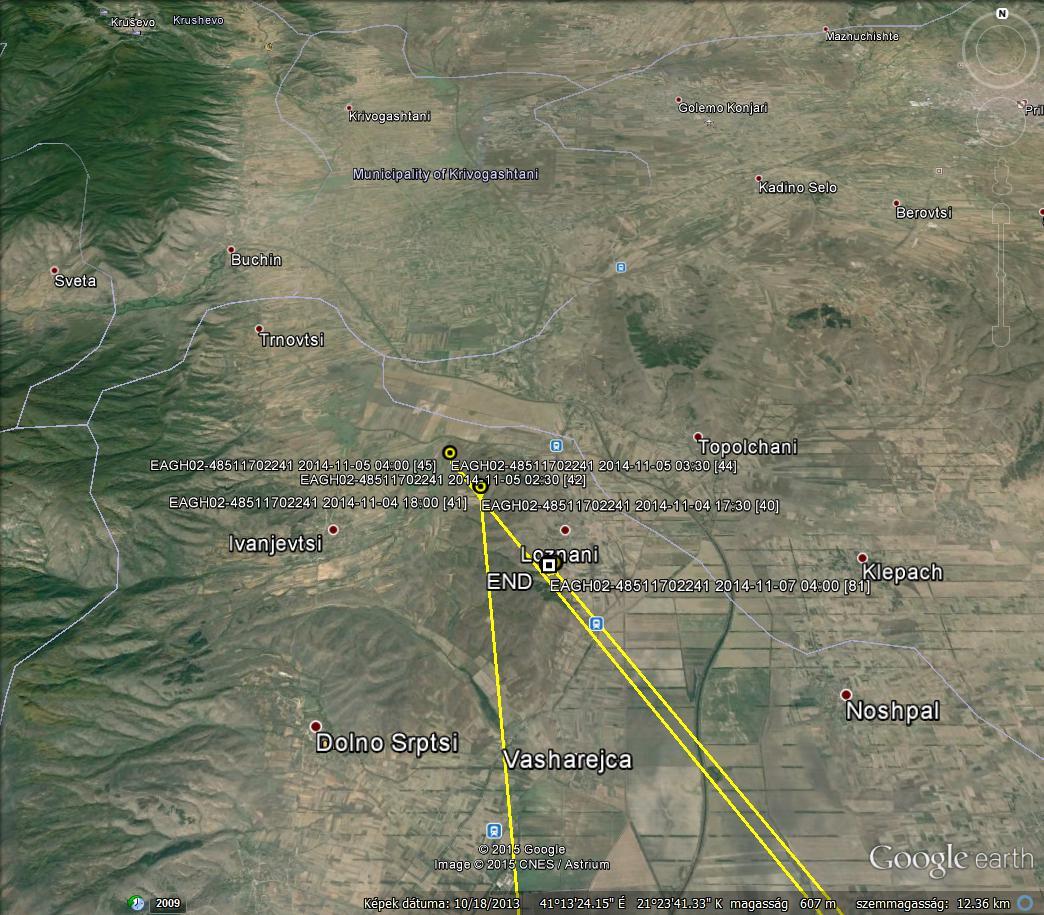 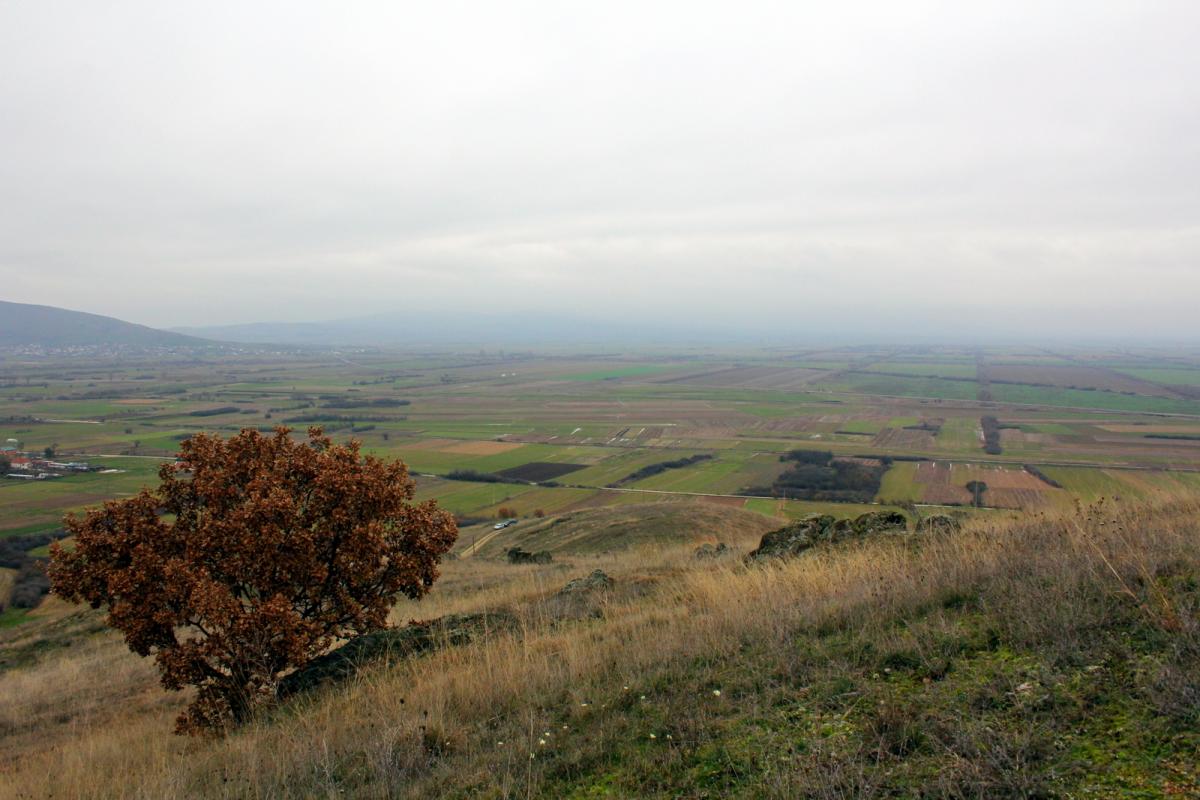 View of the Pelagonian Heights from the hill the last signals came
(Photo: Gergő Halmos).

From here we continued our journey to the Veles region known as the main area for Imperial Eagles. The whole national population of 25-27 breeding pairs can be found here. Most of the nests are on artificial platforms put on pylons while a small portion is on trees. In the wintertime, the local dump near Veles is their main important place to gather. The area is rich in preys in the first place and the large amount of slaughterhouse waste taken to the dump provides continuous food source for immatures during the winter. Several satellite tagged birds proved already the importance of the area. 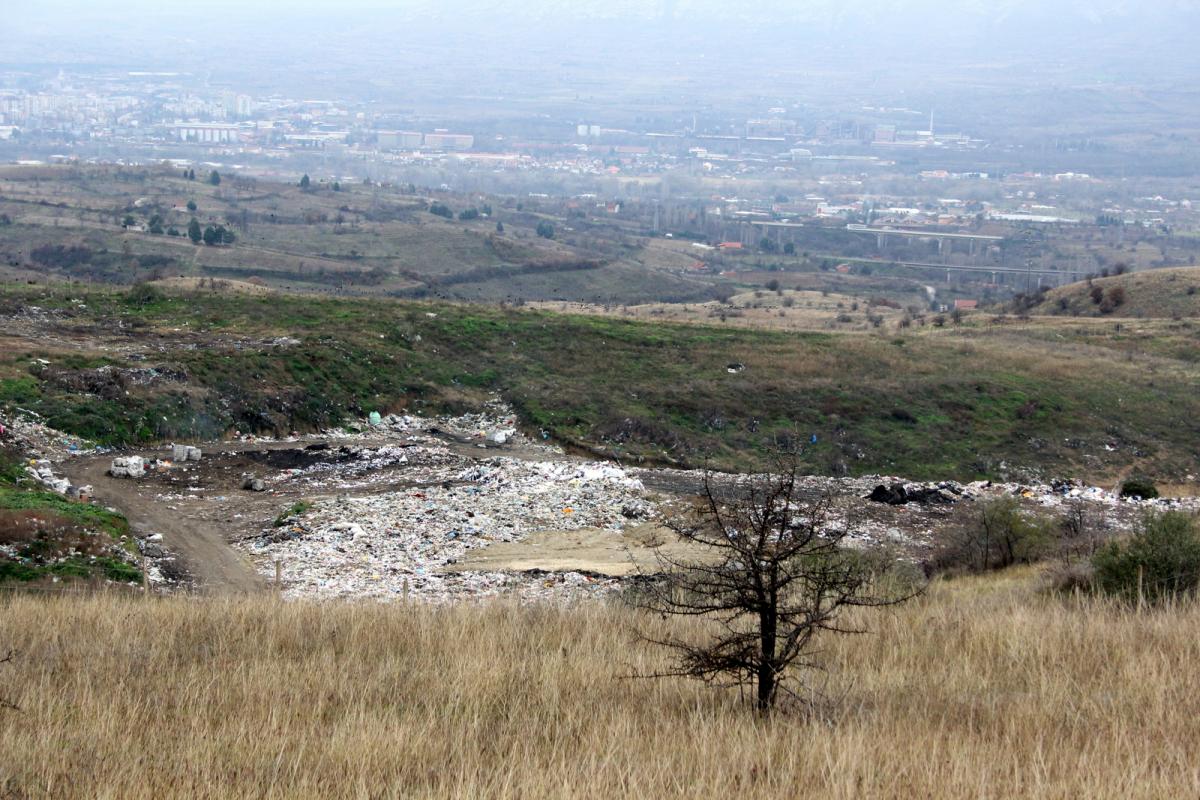 Then, finally we headed home. We concluded that there were a lot to do on the bird conservation front in the country and we have to make every effort to help the local bird conservation organizations in the future.