Illegal materials and methods are authorized to use in fighting rodents

National Food Chain Safety Office (NFCSO) has recently issued permits for airborne and ground use of a hazardous chemical, called Redentin. Neither the chemical itself nor airborne application is allowed in the EU. NFCSO issues “emergency permits” every year regarding this serious and recurrent problem.

Although, MME and Greenpeace cannot assess either the significance of the damage rodents cause or previous termination of the predicting system, they would like to draw attention to the fact that authorities try to stop rodents with certain materials that are illegal in the EU. “Emergency permit” has been long known and was issued this year for the Bóly Zrt, together with the Reanal Zrt, which is a producer of Redentin. 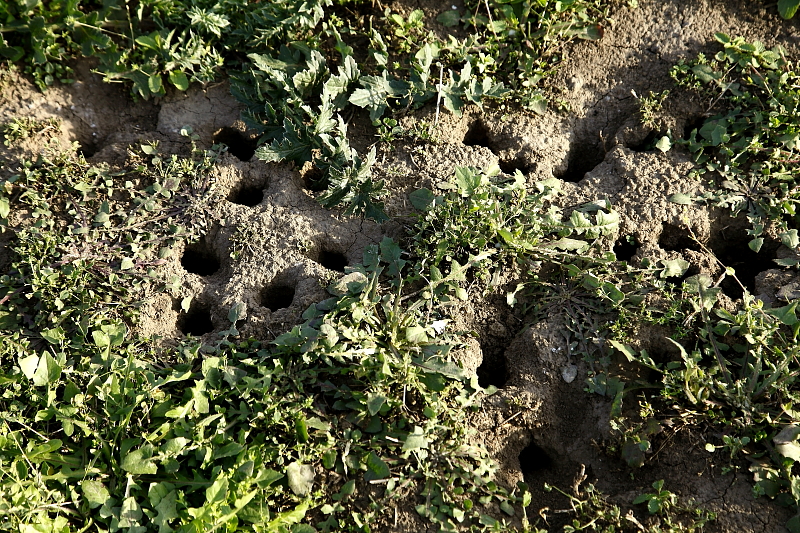 Burrows of voles in an alfalfa field (Photo: Zoltán Orbán).

Why is it risky?

The agent of Redentin kills the poisoned animals (mammals, birds, fishes) after days of suffering. This anticoagulant which is dangerous even to humans, as well, is prohibited in the EU, but through its airborne application it cannot be avoided that other living creatures, like birds of prey, hares or roe deer perish by it. The material only degrades in weeks and the meantime it may cause the death of scavengers and predators” – Gergely Simon said, regional chemical expert of Greenpeace.

“The use of Redentin is concerning with respect to nature conservation. In the one hand, not only common voles but other protected and hunted species may consume it, which can be highly risky if the decomposing bodies get into water bodies. 200 ruffs and a single crane fell victims to such Redentin poisoning in 2002. Even birds of prey may die to secondary poisoning, as was the case when a White-tailed Eagle died in 2006. In addition, the reduction of common hare and hamster populations can be significant and may lead to serious problems in the conservation of their main predator, the globally threatened Imperial Eagle in Békés County, especially during the chick-raising stage. The risk multiplies by the airborne use of Redentin ” – Dr. Márton Horváth, the leader of the species conservation group said. He fights to reduce poisoning within the framework of a LIFE project.

Why is Redentin allowed to use?

The recurrent problem of the Redentin points out to a legal loophole, and its elimination would serve common health care and environmental protection interest of the EU. Greenpeace is particularly concerned about the way member states interpret Article No. 53 of Regulation 1107/2009 of the European Parliament and Council. The Article states that “under special circumstances state members may give permits for restricted and controlled use of certain pesticides up to 120 days if it is necessary because of a danger could not be avoided otherwise.” However, Hungary receives permit for the Redentin along with other dangerous chemicals despite that three different rodenticides have been available recently with a permanent license in Hungary.

“It is obvious that large-scale farming is not able to get rid of even prohibited, dangerous chemicals, which directly or indirectly contribute to the decrease of the rodents’ predators, eventually the chemical may eliminate animal communities in the habitat, among them ones that could be its natural alternatives. The example shows why monoculture and large-scale agricultural systems cannot be maintained in its present form due to the disappearance of the habitat of rodents’ natural enemies. Lacking these, farmers can only fight against rodents with dangerous chemicals. – added Gergely Simon, regional chemical expert of Greenpeace.