Two strictly protected Imperial Eagles were poisoned again. The police has launched an investigation against an unknown culprit. The young birds were born in Borsod-Abaúj-Zemplén County, and they were just about to leave the nest site to start their independent life in the Carpathian Basin.

During autumn and winter the number of poisoning cases increases in general, partly because of the inexperienced juveniles disperse in a larger area after leaving the nest sites and partly because of the detectability of the poisoned baits on the bare ground with no vegetation cover. In this latest case the young Eagles were found close to the nest, so intentional persecution against this Eagle family cannot be ruled out. The parents haven’t been seen since the poisoning and so far we don’t know whether they ate from the bait or not. Nearby the dead Eagles there were bodies of four Ravens and two dogs, their toxicological examination is on the way. 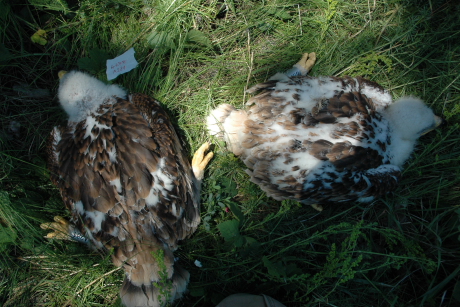 The Juvenile Imperial Eagles were ringed in June.

Márton Horváth, leader of the Imperial Eagle conservation programme of MME said: “Persecution of protected and strictly protected Birds of Prey in Hungary was always a problem. The strong poisons get in the food chain; stray domestic animals can feed on the carcasses and it’s dangerous even to humans. 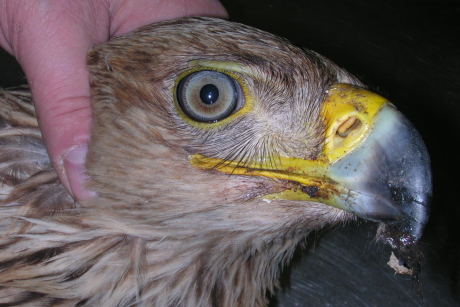 Earlier this year MME has undertaken the coordination of a large project supported by EU’s LIFE programme, the goal of which is to reduce bird crime. During the timeframe of the project a national network of veterinarians will be established to treat injured birds, protection of the nests in danger will be organized as well as erecting artificial nests and the temporary feeding in wintertime. To increase the proportion of cases solved all the participating organizations will patrol more frequently in certain imperiled areas along with specialized dogs. There will also be a through line (20/251-44-04) to report any information about nature crime.