Life of an adopted eaglet can be followed live on the net!

There is an Imperial Eagle pair in the Jászság, which has been attempting to breed without any success for years. Their eggs have proved to be infertile. The case was the same this year, however, a healthy eaglet is being reared in the nest and his life can be followed on the net. How did that happen? It is a beautiful family history straight from the eagle nest.

Late March, the associates of the Körös-Maros National Park Directorate noticed that a nest, guarded by volunteers within the framework of the HELICON Life+ programme, was abandoned by the parents. They quickly saved the two eggs left in the nest, and one chick hatched from one of those ten days later in the Dévaványa Bustard Conservation Centre. National Park rangers subsequently transferred the precious bird, who was named “Kelemen” to the Eagle Centre in the Jászság. He was eagerly awaited, and even foster parents were picked for him already.

Conservationists chose an infertile eagle pair, which has been incubating, as in previous years, two dead eggs. This particular pair has been monitored by scientists for years with the help of their DNA originating from their shed feathers. The pair was trying to breed in the Hevesi-sík in 2011, however, due to probably the infertility of the male, unsuccessfully. After the presumed death of the female, the male moved to another territory and paired up with another female but they have been laying eggs in vain for four years now.

Associates of MME and the Hortobágyi National Park swapped one of the dead eggs to the healthy chick and started to have it guarded it with volunteers. The eagle pair accepted the newcomer without any problem and started his feeding as well. Even though, they were not capable of raising their own chicks, they proved to be good hunters and foster parents. Thank to them, Kelemen has been growing well. He also got a colour ring early June. Associates of the project partner organization Termeszetfilm.hu could deploy a web camera above the nest. From now on, anyone can follow their lives until his fledging around mid-July. 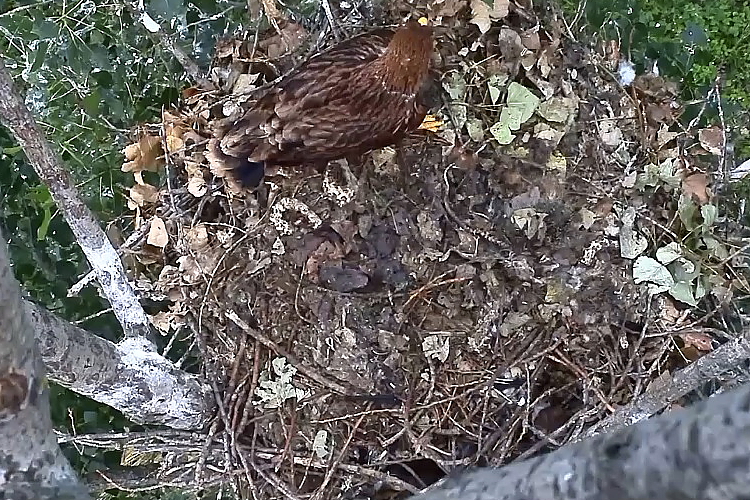 ”Kelemen” is on a footage from June 30, 2015. Live streaming is available until mid-July.
Click on the picture!