Birds of preys have always been considered by game-keepers as pests which take a serious toll on the populations of their “precious” small game species. One would never think that certain raptors, notably Imperial Eagle and White-tailed Eagle in Hungary, being on the top of the food chain, are the most effective regulators of the populations of such species, mainly corvids and mammalian predators, which are hunted legally otherwise, therefore benefitting hunters.

Raptors would always opt for preys, which are readily available and may be hunted down with least energy investment. In addition, several international studies also showed that top predators usually prey on so called “meso-predators”, species sitting just below them on the food chain, which decreases competition with them for food and breeding habitat.

Unattended chicks in the nest or recently fledged, therefore quite unexperienced youngsters of Carrion Crow, Magpie, Long-eared Owl, as well as Common Buzzard and Kestrel regularly fall victims to eagles. It’s no coincidence that corvids immediately sound the alarm in the presence of eagles and ferociously mob them performing dive-bombing behaviour. Imperial Eagle experts regularly collect food remains from below their nests and usual perches, from which we know their diet in details. 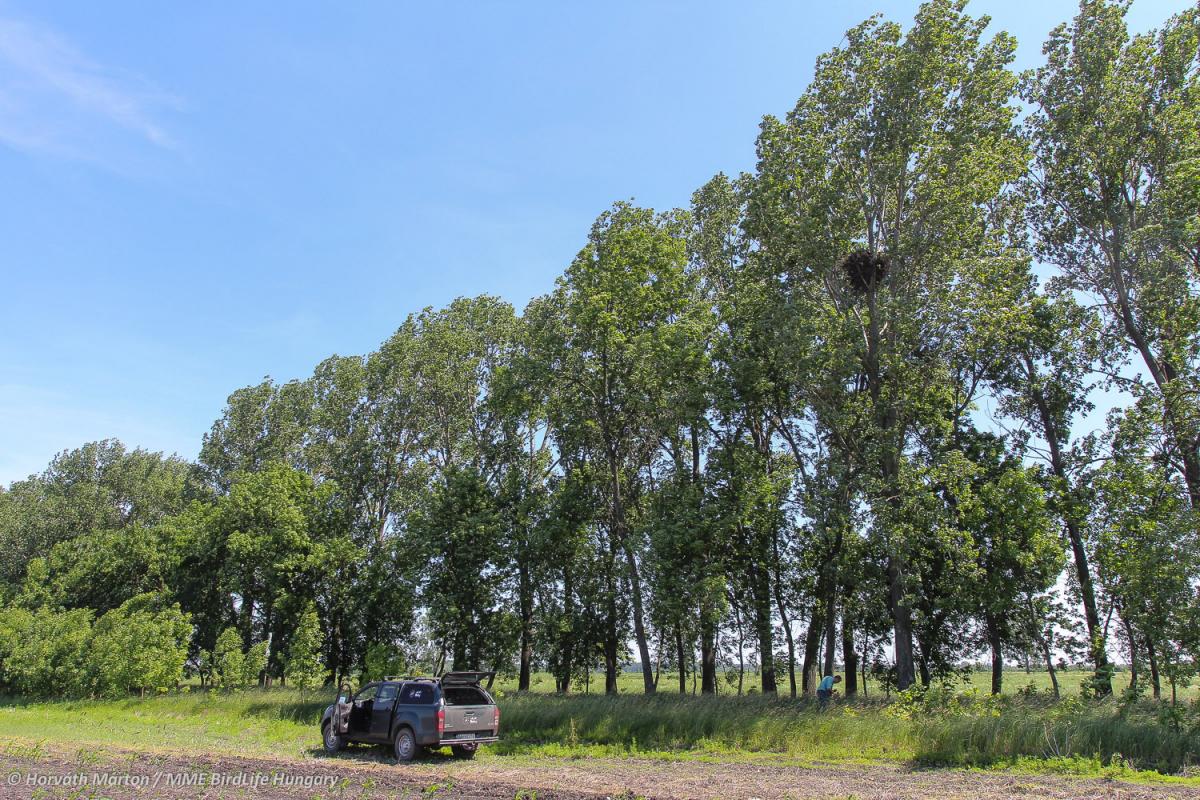 Collecting food remains under an Imperial Eagle nest in the Hevesi-sík in July 2016
(Photo: Márton Horváth).

Preliminary results of this year’s food analysis had a surprise in store even for the researchers. Out of the first identified 535 remains, formerly common preys such as the European Hamster and Souslik were represented by only four (0.75%) and one (0.19%) specimens, respectively. Naturally, the reason behind these alarmingly low numbers is not the changes of eagles’ taste but a drastic population decline of these species instead. In parallel with this, combined ratio of Magpie and Carrion Crow exceeded 20 % catching up with Common Hare being previously the number one prey.

However, there were other extreme examples of preying on predators. In the Jászság area, remains of at least six different Marsh Harriers were found. Researchers, who participated in an expedition to tag Imperial and Steppe Eagles with satellite transmitters in the Samara region in Russia, had a similar experience having found lots of Montagu’s Harriers and also a Steppe Polecat as prey in eagles’ nests. 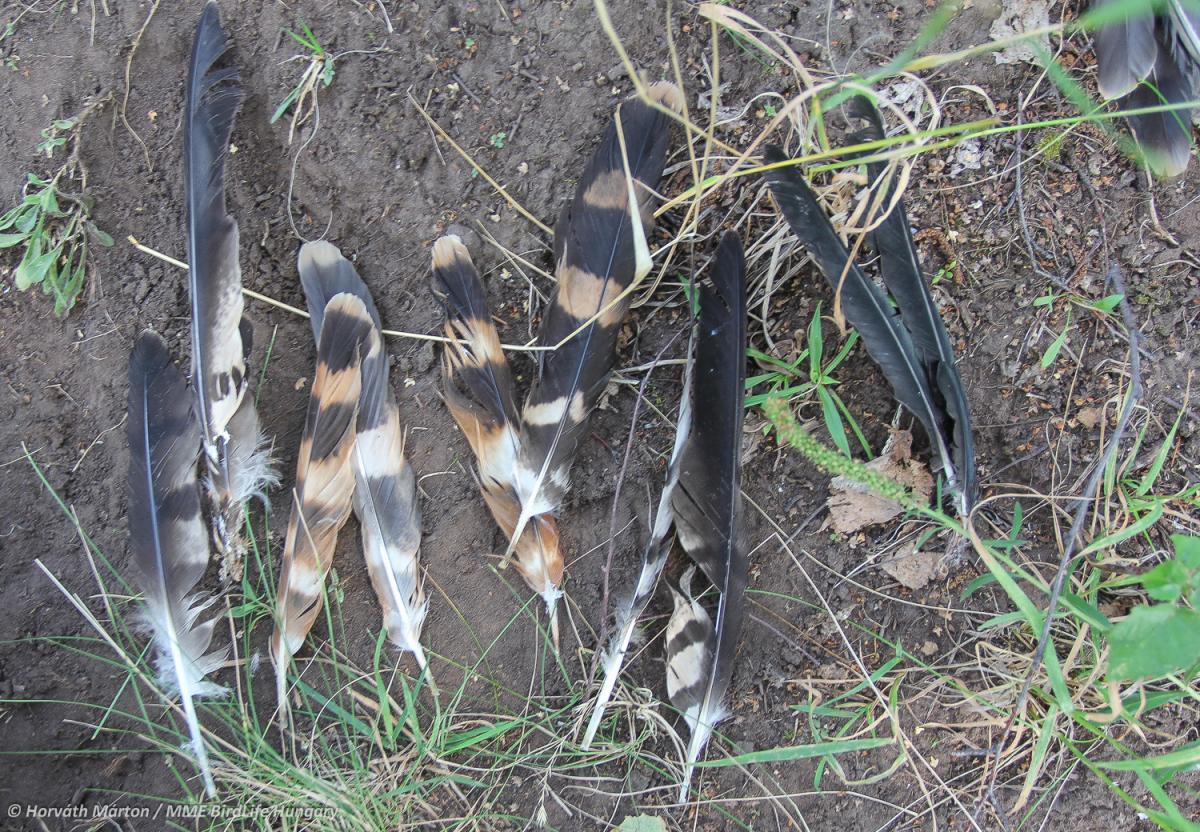 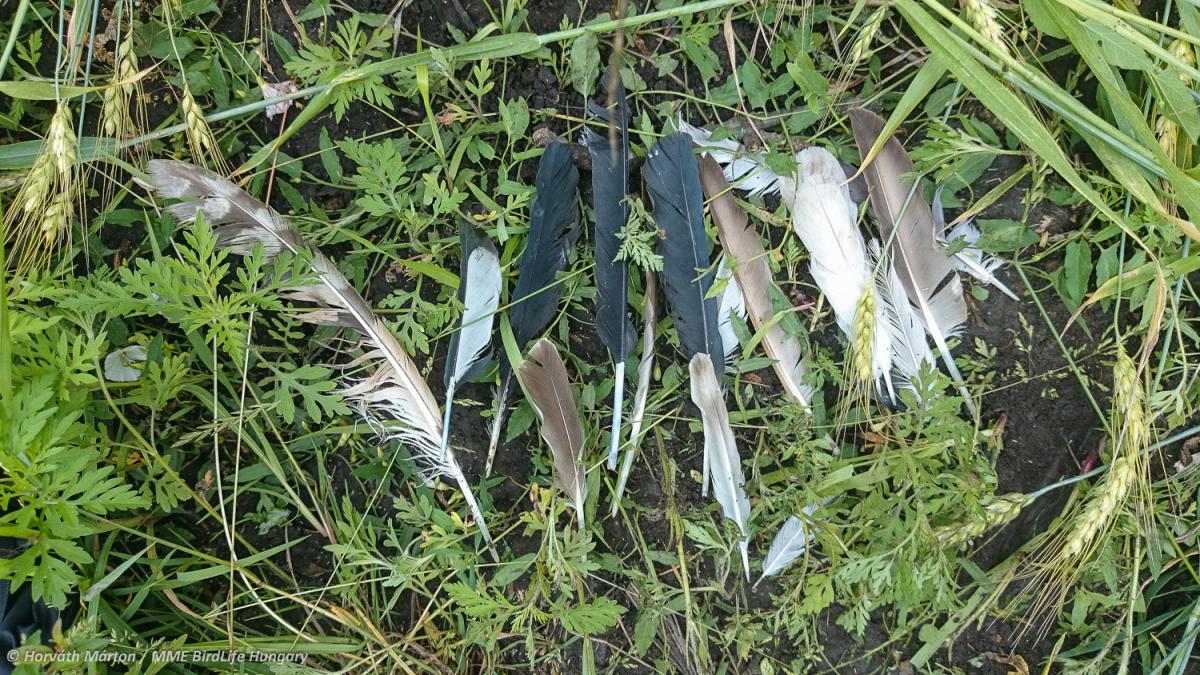 Feathers of Long-eared Owl, Magpie, Carrion Crow, duck and pigeon found under a nest
in the Jászság in July, 2016 (Photo: Márton Horváth). 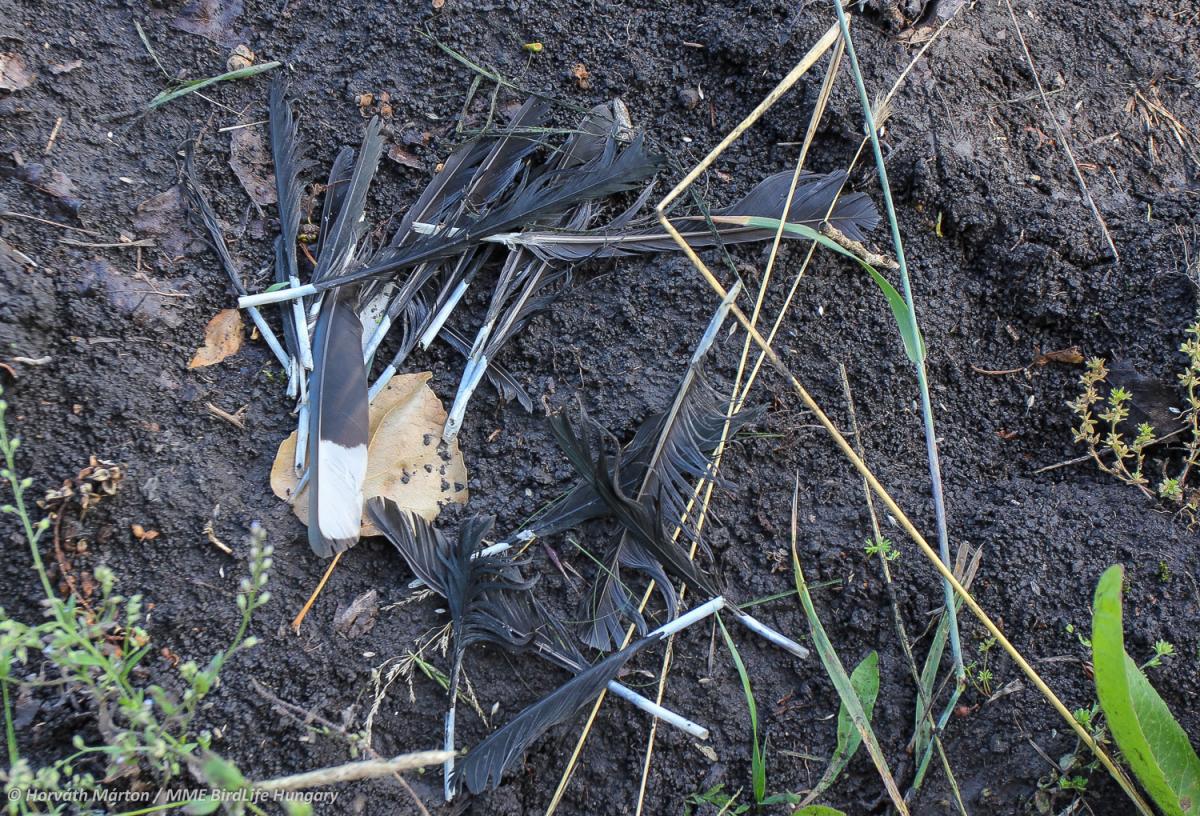 Remains of Magpie and Carrion Crow under an Imperial Eagle nest in the Jászság
in June, 2016 (Photo: Márton Horváth). 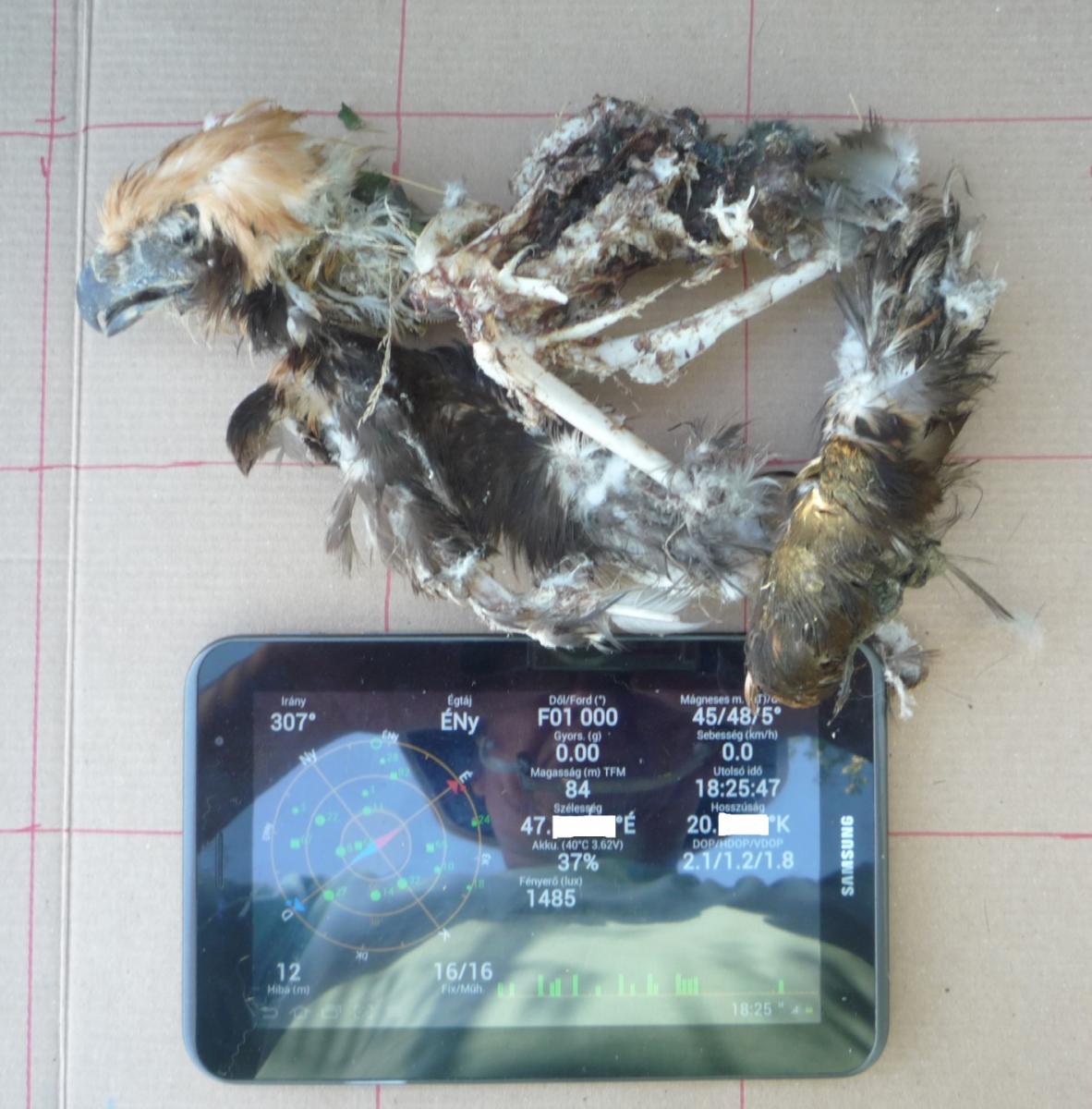 Remains of a Marsh Harrier found under another Imperial Eagle nest in the Jászság,
in August, 2016 (Photo: Imre Fatér). 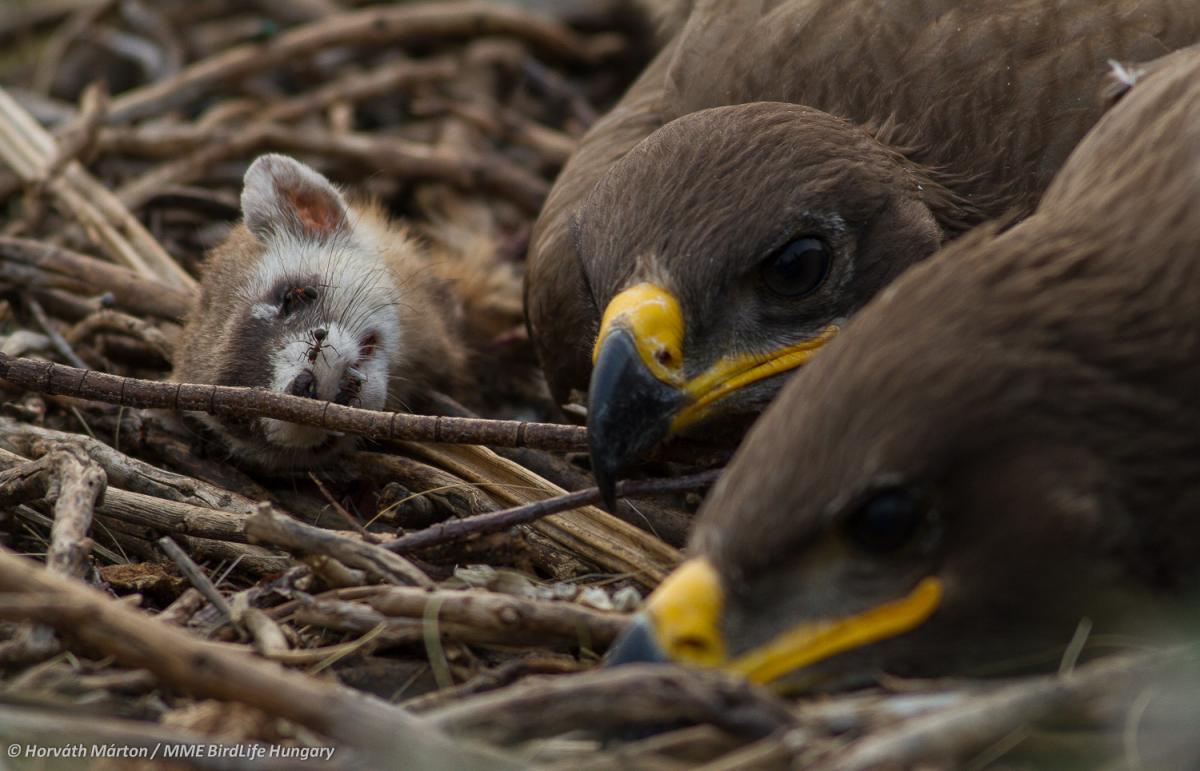 These findings all prove that top predators quickly realize and take full advantage of opportunities arise in nature. A detailed analysis of all the prey remains collected within the framework of MME’s HELICON LIFE+ and RaptorsPrey LIFE+ projects will be available soon, following which we will report about it as well.