The 11th National Eagle Census was organized by MME/Birdlife in collaboration with Directorates of National Parks and other NGOs.

Record number (331 people) of volunteers have participated in this year’s Eagle Count. Analysis of the increased amount of data took longer time than normal.

The survey covered about 14.000 square-kilometers, including the most important Eagle wintering habitats. Monitoring of the Great Bustards –bird of the year 2014- was done parallel with that of the raptors.

After adding up all the counted birds, the final tally stood as follows: 563 inds. of White-tailed Eagles, 220 inds. of Eastern Imperial Eagles, three inds. of Golden Eagles and seven inds. of Greater Spotted Eagles. Eagle density was similar to that of the previous years’, about six birds per 100km2. Last January, there were more White-tailed Eagles but less Imperial Eagles counted. Greater Spotted Eagles have never been observed in such numbers (seven birds), which may mean that Hungary has become an important wintering place of this Globally Endangered species. Presumably, they stay in Central-Europe because of the global warming, instead of flying all the way down to its regular wintering sites in Southern Europe and Asia Minor. This species reaches the western edge of its distribution in East Poland and in the Baltic countries, where only 30-50 pairs exist altogether, so each individual’s survival is vital to this fragile population. 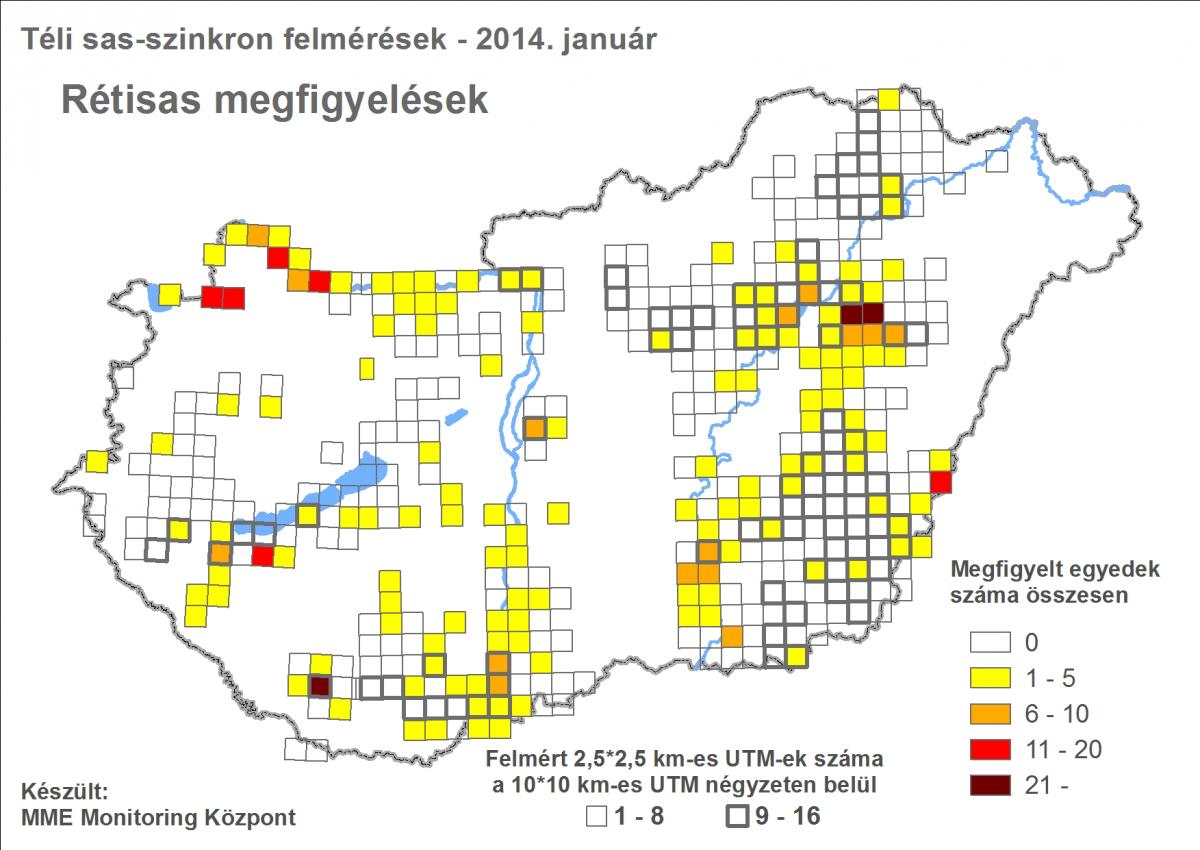 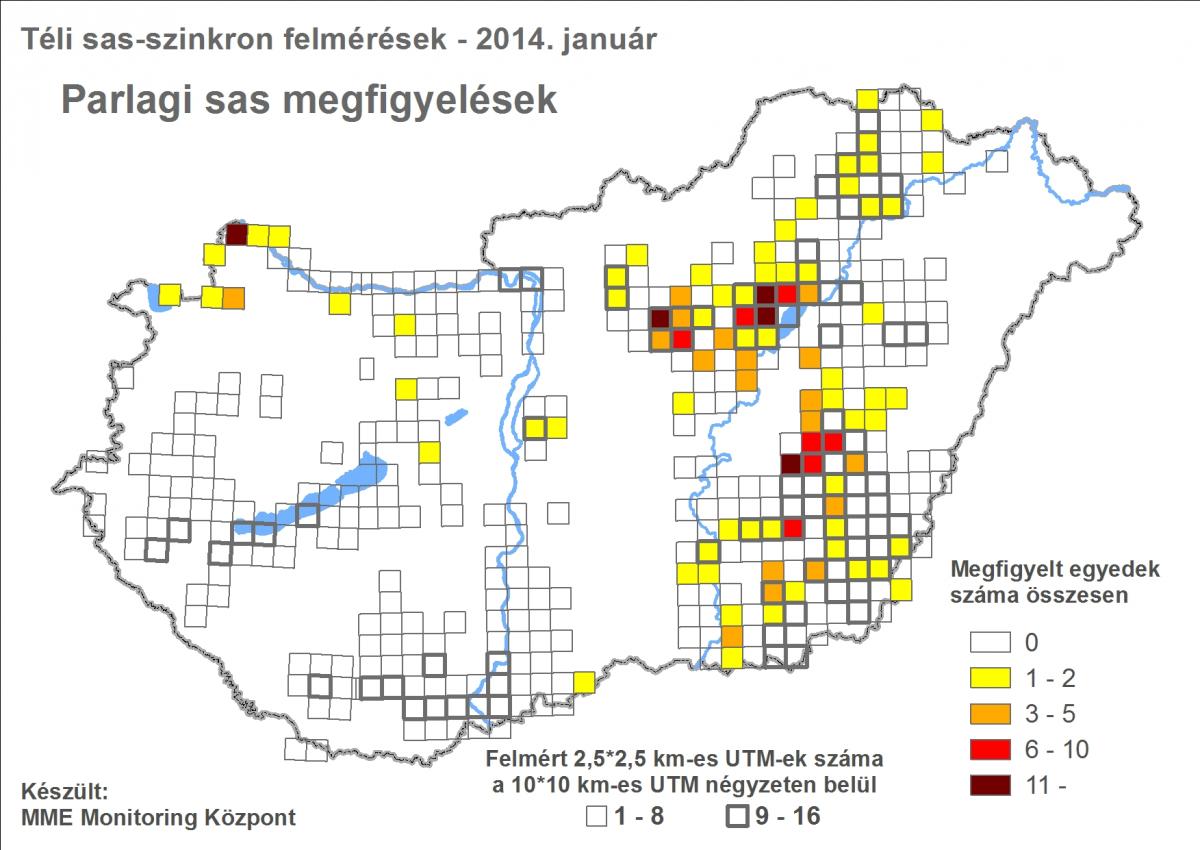 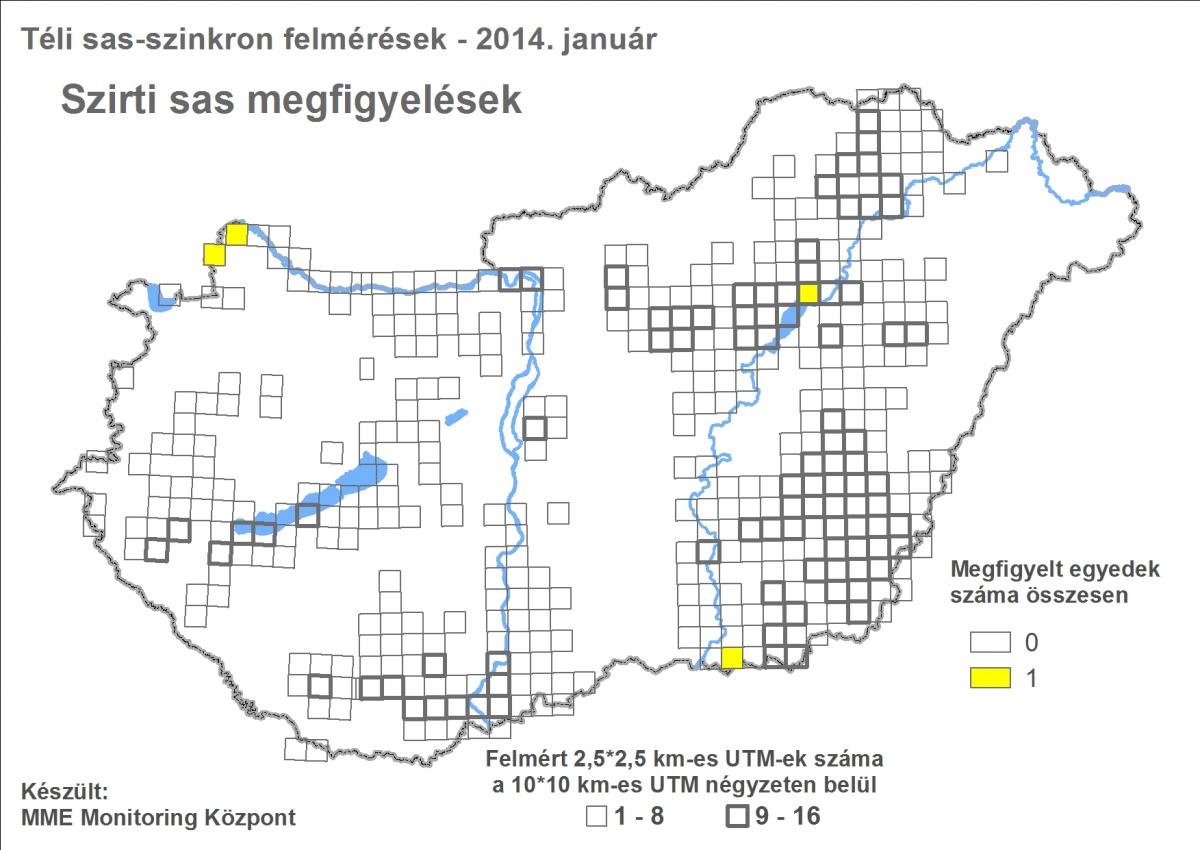 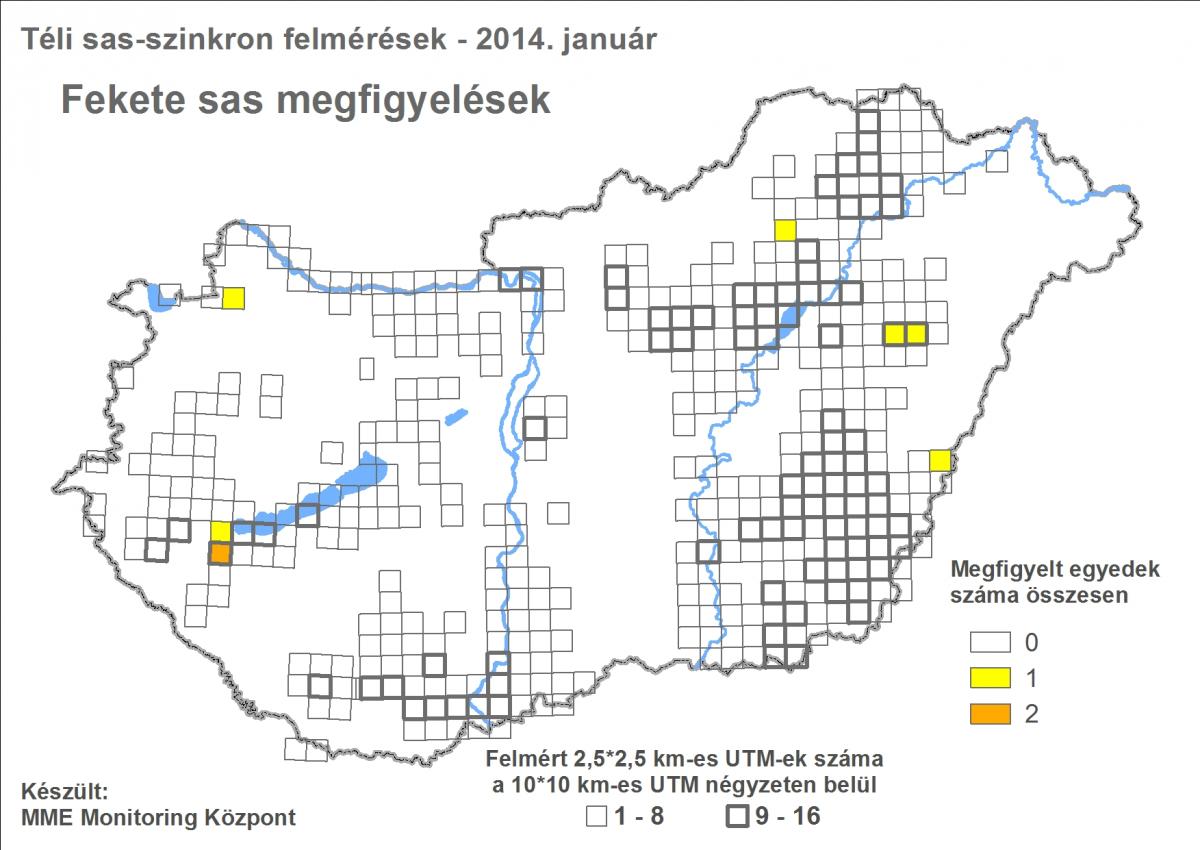 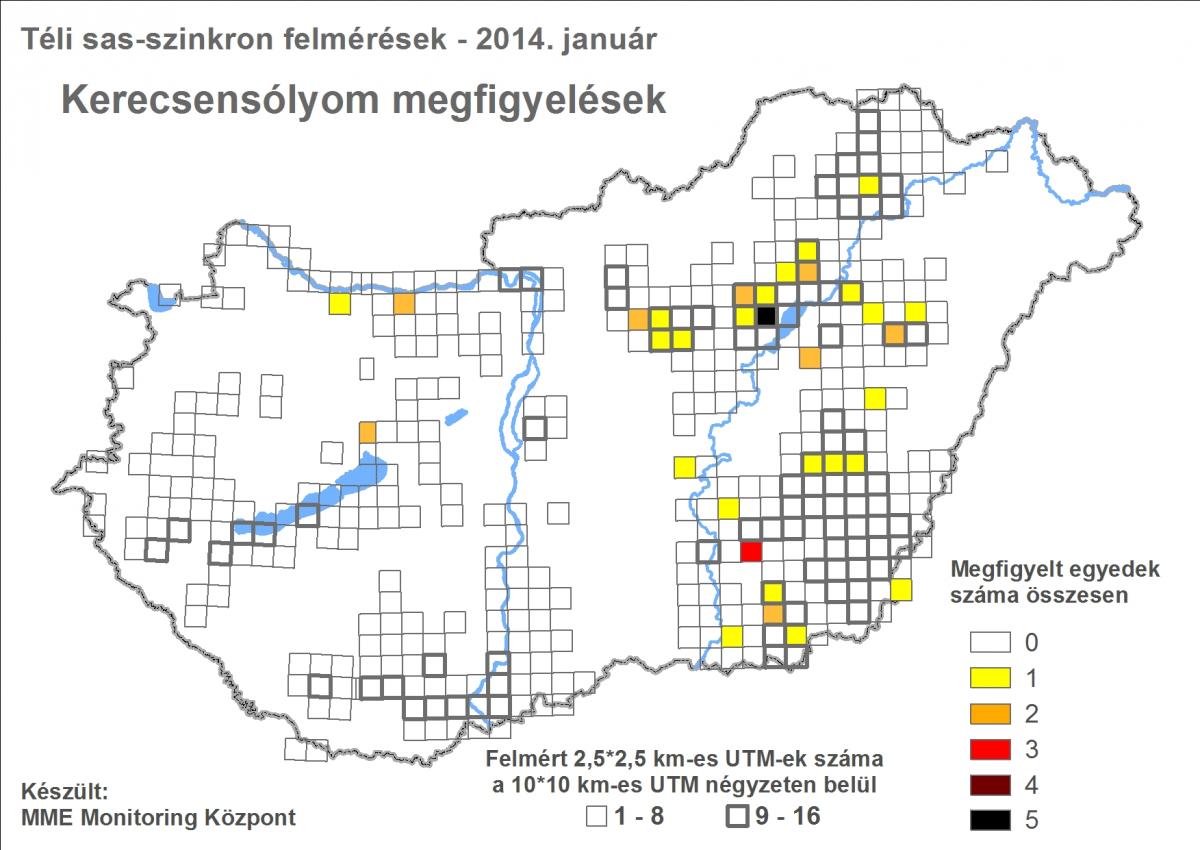 Nature conservationists have also monitored the numbers of the Great Bustard in most of the survey areas. Altogether, 460 Great Bustards were observed, which is approximately one-third of the Hungarian population (about the results of the national Great Bustard monitoring you can read more here >>).

As it was the case in previous years, Common Buzzards were the most abundant (3464 inds). Observers counted 528 Hen Harriers, 392 Common Kestrels, 133 Sparrowhawks, 110 Rough-legged Buzzards, 35 Sakers, 27 Merlins and Peregrines, respectively. The widespread but secretive Goshawks were recorded seven times, while Long-legged Buzzards were represented by only five individuals. Marsh Harriers are migrants, however, they have been overwintering in increasing number recently, probably due to climate change, and 35 of them were recorded by Eagle Count participants. 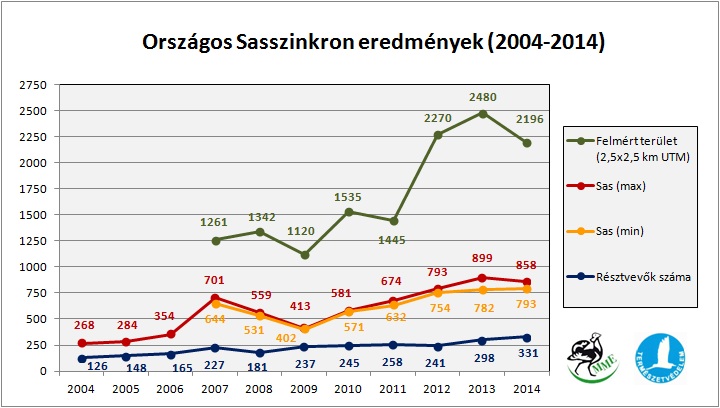 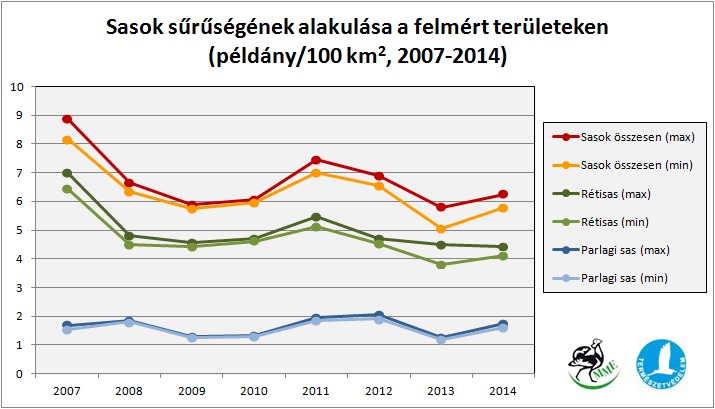 „Eagle density” based on the results of the National Eagle Count between
2004-2014 (Source: MME Monitoring Center).

One of the main aims of the yearly census, besides accounting records of wintering raptor assemblage, is scouting out, monitoring and preventing illegal poisoning activities. Unfortunately, Hungary takes the lead in the total number of bird crime cases, and considering the sheer number of wintering Eagles here, we have huge responsibility in their protection. To fulfil this purpose, an EU funded LIFE+ project, “HELICON - Conservation of imperial eagles by managing human-eagle conflicts in Hungary”, has been running coordinated by MME/Birdlife (www.parlagisas.hu).