The springtime poisoning wave is not slowing down

“Falco”, the detection dog of the HELICON LIFE+ programme, and his handler, Gábor Deák, associate of the MME, had to work hard in the second half of March and the results were disastrous.

Both of them were in the field in the past two weeks in Bács-Kiskun, Fejér, Békés, Pest and Csongrád counties visiting scenes of reported poisonings. Moreover, they also visited all the “hotspots”, where perpetrators were very active in the past few decades.

This type of work could only be joyful, if nothing was found. However, the situation is not like that. In the last two weeks of March during seven field days, four White-tailed Eagles (two adults and two immatures), two Imperial Eagles (one of them was adult), more than half a dozen of Common Buzzards and three Ravens, as well as a Jay, a European Badger, a Red Fox, which are not protected species, and lots of poisoned baits were discovered. Direct nature conservational damage reaches six million forints including only the strictly protected eagles, of which each possesses one million forints conservational value. Considering that the breeding season has commenced, the future of two or three chicks per clutches that would have probably fledged otherwise, is questionable, therefore the indirect damage is much bigger than that.

On their exhausting field days, Falco and his trainer also had to be prepared for accompanying the police doing house search anytime if they found any evidence of poisoning. Their recon work is not just about searching for carcasses and poisoned baits. In case they find something, they have to call the police to secure and process the crime scene as the first steps during the investigation. House search is part of this and the unsurpassed sense of smell of a dog provides an invaluable help in the search of crime evidence.

Let’s take a look inside Gábor Deák’s and Falco’s diary!

We have visited two Imperial Eagle territories in the Vértes Hills. Fortunately, everything seemed to be fine with them having already renovated their nests built last year. There was no shortage of excitement either. Falco bumped into a wild boar family, what the sow did not appreciate and wildly grunted while gathered her piglets. I had to grab Falco’s harness and quickly ran up the hill to avoid any further disturbance.

Visiting a fresh poisoning scene with Imre Fatér in Csongrád County. Yesterday, two adult and a young White-tailed Eagles were discovered close to a wheat field. In the morning, we received all the necessary information from the local rangers and while we had been in the field they organized the police investigation during the afternoon.

The set-up was as usual, Falco and I started to search the tree lines nearby while Imre drove around the agricultural fields. Falco and I covered quite huge area, we walked all the way to where the poisoning scene of 2013 was, but we could only find three carcasses of cats and remnants of usual common species. Imre finished his route with similar results. We were about to look for other potential scenes when I picked out a dead Common Buzzard in a parcel left idle this year. Walking through this parcel we found two more Buzzards and Imre discovered a dead pigeon used as bait on a wheat field. We had secured the area till the police arrived, and in the meantime we found another bait as well. As the police started the investigation we continued ours, further away. Results were a carcass of a small dog and the decomposed body of another Common Buzzard. 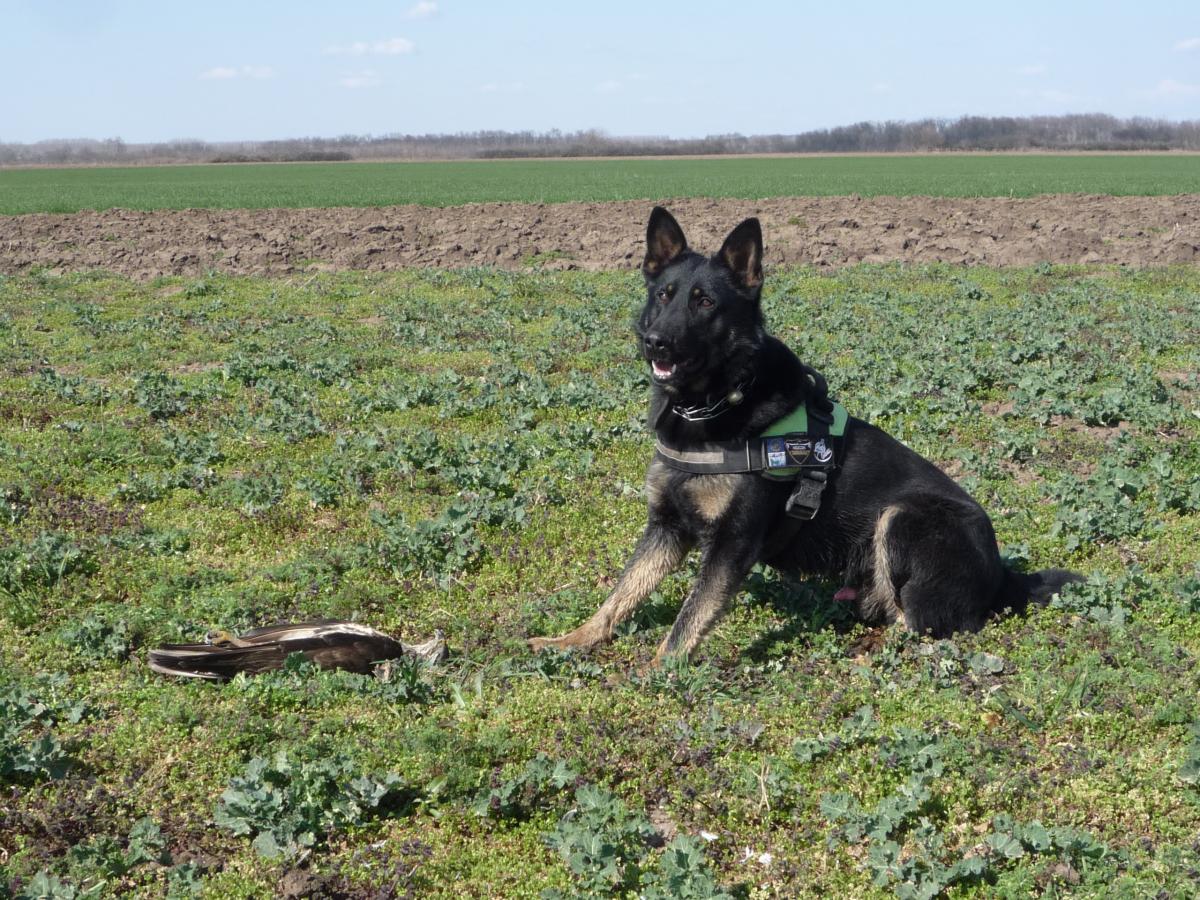 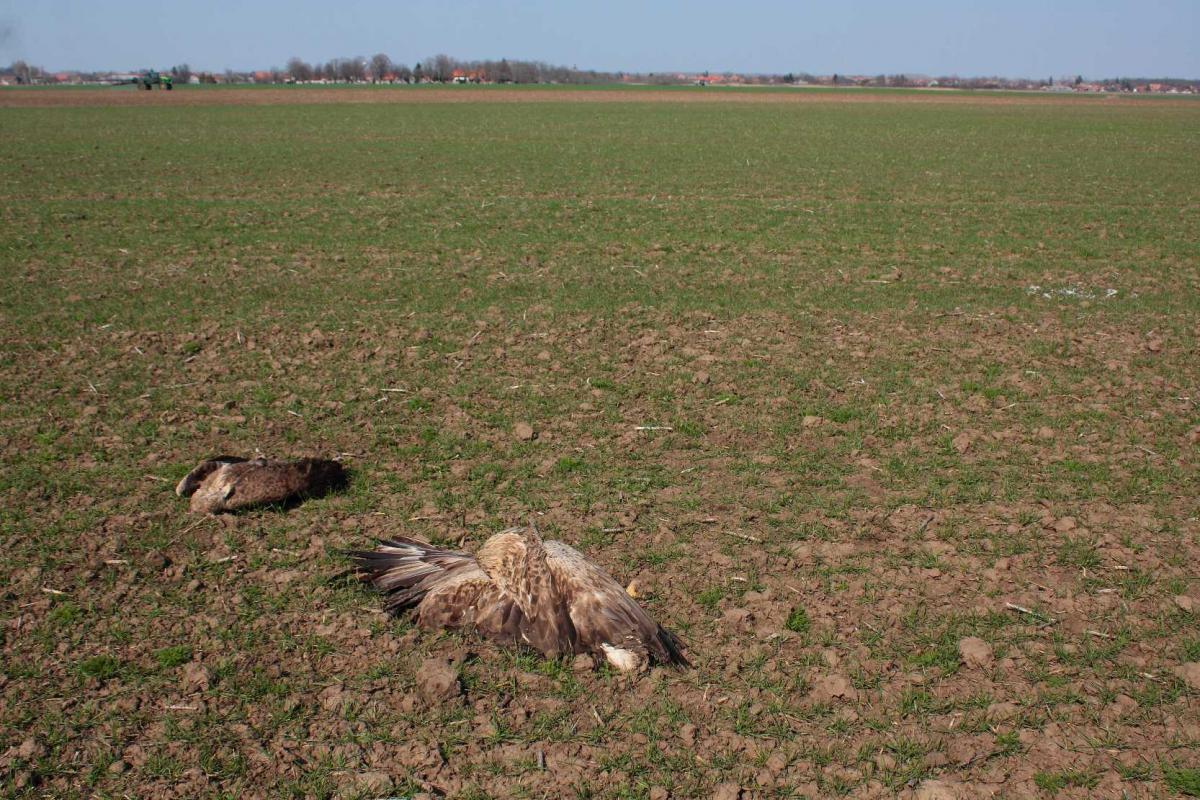 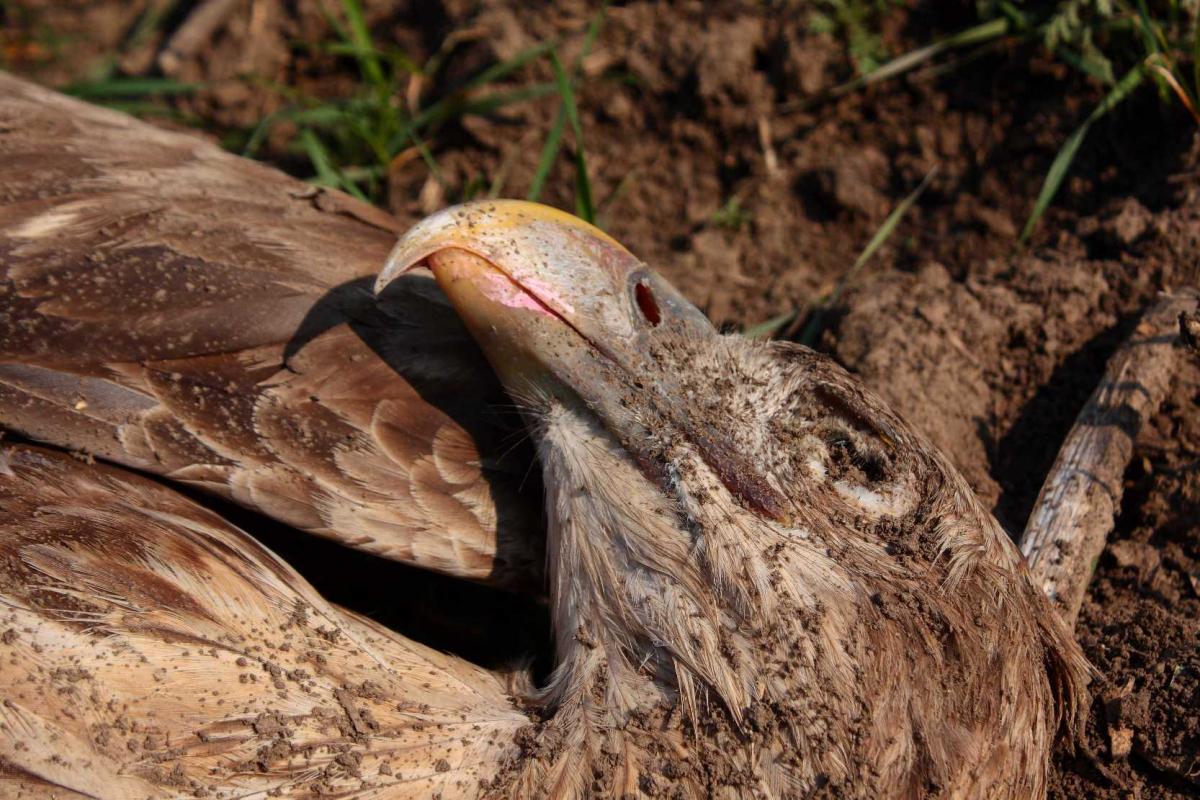 Close-up of one of the eagles with pinkish material on its beak. (Photo: Gábor Balogh).

Based on evidence found so far, we consider this area a „hot-spot” of poisoning. Prior to this sad event, there were two Marsh Harriers, a fox, a hedgehog and poisoned eggs and a pigeon were discovered a few kilometres from here. Moreover, in April 2014, we discovered some dead buzzards and two poisoned pigeons together with local rangers about five kilometres away.

Today’s search convinced us about the importance of having at least two people, one searching the tree lines while the other the open fields.

We tried to find the body of the Imperial Eagle reported earlier in Békés County. The start was slow due to that the informant could not be found over phone either the day before or that morning. Eventually, we met and he gladly showed us the place where he found the dead eagle near an oak forest. Neither remnants, nor feathers were found in the beginning, however, Falco soon found one of the eagle’s legs. People working nearby looked at him in awe by the show he put on, and shortly later the other leg was discovered as well. Nevertheless, nothing else could be found, which is very suspicious. The area is rich in small game species, however, we barely saw any raptors.

Having finished browsing through the area, we decided to move on to another. It also seemed to be avoided by raptors. And then, we discovered carcass after carcass, however, only bones and feathers. While searching along the forest line, Falco stopped, turned around and ran out to a ploughed parcel. He found a young dead White-tailed Eagle (again, he surprised everybody watching, since he went straight to the carcass from 30 meters away, as if he was pulled by an invisible cable). 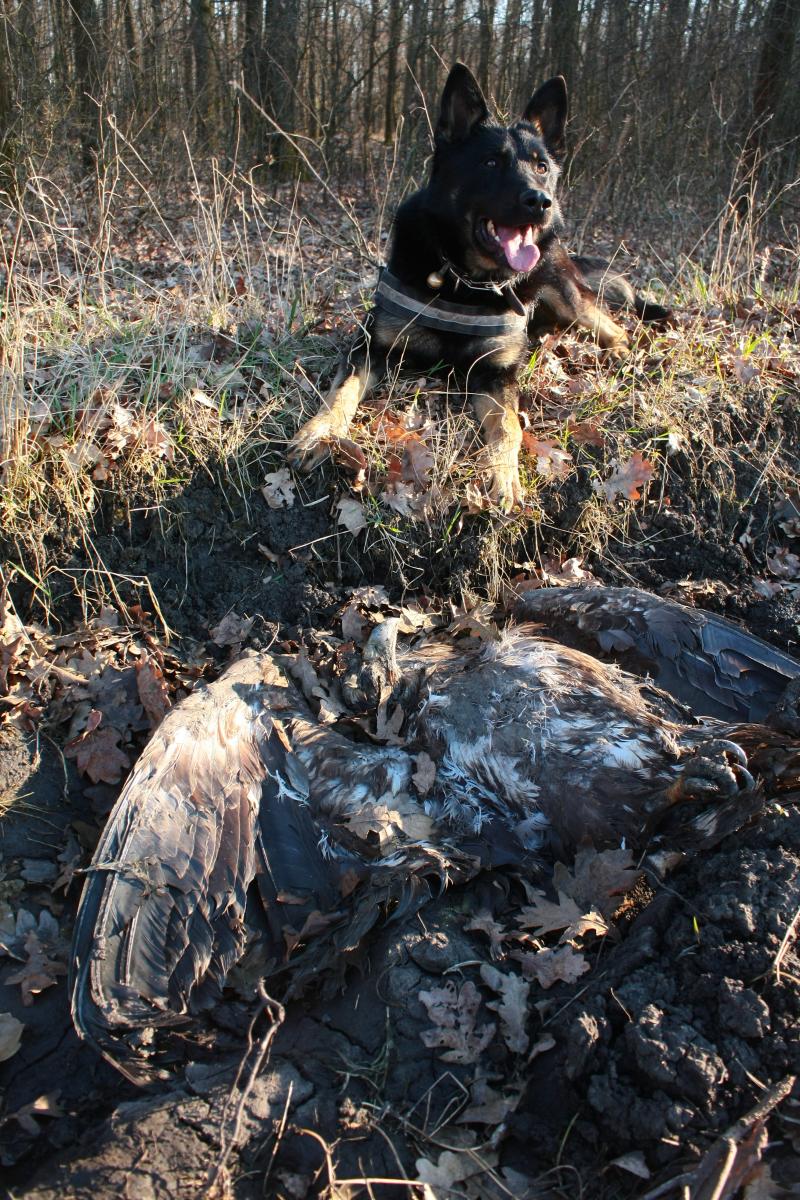 It was worrying that it already passed 16 o’clock and we could only call the police now. We kept continuing the search as they arrived, and we found some more, older buzzards and a relatively fresh one. Congratulations to Falco, since we passed without noticing them. It was already dark by the time we finished the investigation, and then we went to the local vet, who filled the papers for the necessary toxicological examinations.

South Békés County. Huge parcels, lots of small game, feeders are filled up with fodder. Here, we could already see some Magpie nests, Common Buzzards and Hooded Crows and even a young Imperial Eagle. While we did not find anything suspicious, soon the local farmers came to us wondering for what reason someone walked along the edges of the parcels with a dog.

At the second spot, the situation was similar, lots of pheasants, full feeders, however, very few raptors. We were browsing through a tree line with scattered old trees, probably the pheasants were released and hunted here. At the end of the forest patch we found a carcass of a buzzard, which did not show the classic symptoms of poisoning (Although, one leg was cramped but its posture was not spasmodic and there was no phlegm in the beak.)

In our third area everything was the same but we saw another young Imperial Eagle again. During our search, we couldn’t find anything suspicious.

Fourth area. We finished our day here. We search the area around a pheasant farm about 70 kilometres from the previous sites. Only the remnants of a Long-eared Owl were found.

We were on our way home, when we received a civilian report that a probably poisoned but alive Common Buzzard was found near a dead poultry prepared with some red material in Pest County. We informed the local ranger, who was very helpful and went to pick up the buzzard and also called the police. The buzzard was treated with atropine antidote at 21 o’clock, to what it reacted well and started to get better. Forensics reached the spot at one o’clock in the morning and did their job (the bait was tied down with wire). Unfortunately, we could not visit the scene, since we had been working in four days in a row and the dog needed to rest at least a day after such fatiguing, hard work. (A few days later, the local ranger walked around the crime scene and found three additional dead Ravens and several baits as well.)

I participated in a house search with Falco. We had to search for poisons at a hunter’s place, where the police found ten stuffed individuals of protected bird species (of which eight were birds of prey, among them an Imperial Eagle) and possessed firearms without authorisation during a search. We had to channel Falco’s focus exclusively on poisons and not let him signal the feathers of pheasants present all over the place, which otherwise is part of his job in natural conditions in the field. Falco was doing a great job, however, no poison was discovered.

After the search, we moved on to a place in Bács-Kiskun County, where a suspected poisoned adult Imperial Eagle was reported the day before. The site of discovery did not fit in the general picture, there has not been observation of the species for a long time and the carcass was found 10-20 metres from a busy dirt road, which connected the settlement to a resort area. Rangers had browsed through the wider perimeter of this area finding no signs of poisons, therefore we decided to visit another “hot-spot” 10-15 kilometres from here. Fortunately, we found nothing there either.

Finally, we were able to go back to the scene in Pest County, where the surviving Common Buzzard, three dead Ravens and several poisoned baits were discovered last Saturday. Following a thorough search with the dog, two more egg baits, a dead Jay, a badger and a fox were found. According to the protocol, we called the police, who investigated the site. The baits were placed out to protect the European Rabbit colonies nearby. 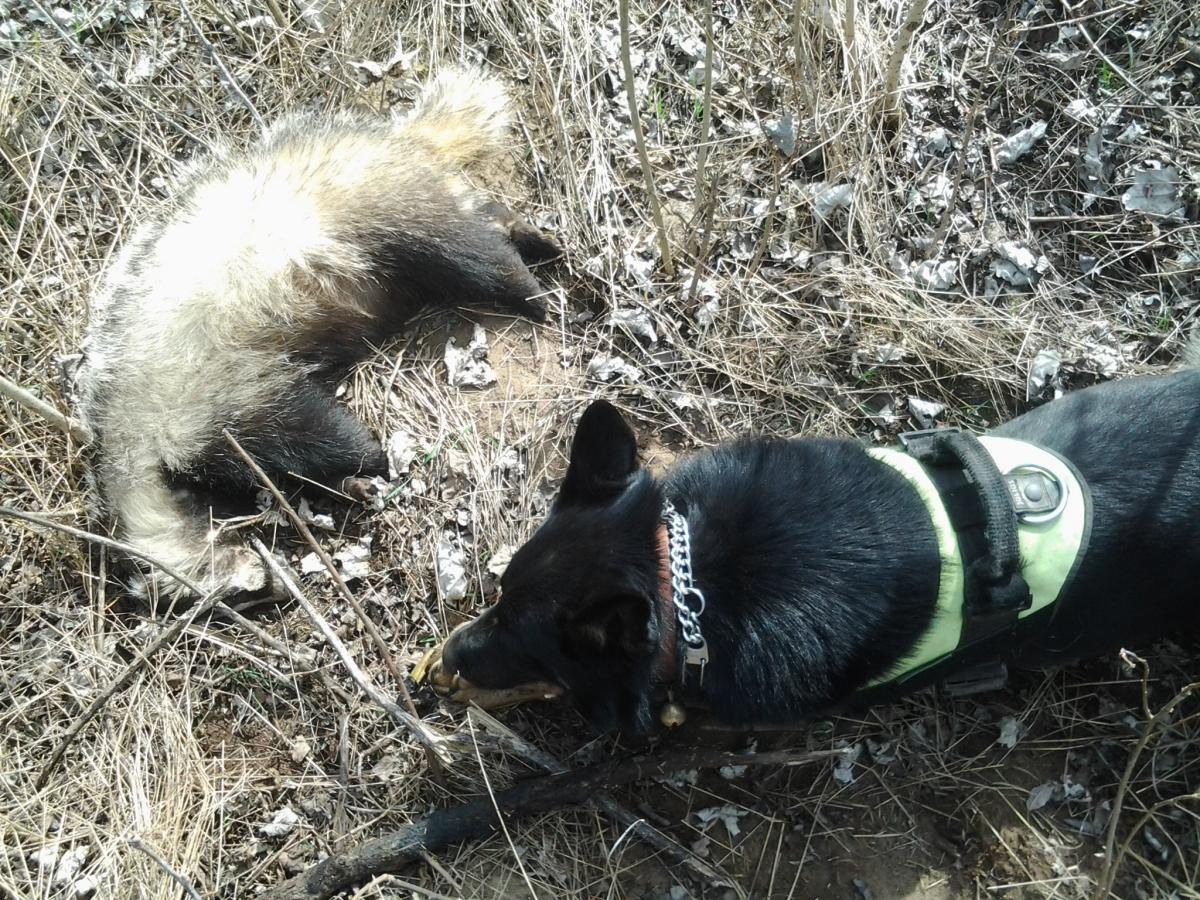 Falco and our colleagues have still not rested, and continued their work tirelessly in other areas day by day hoping not to find anything.