Not just poisoning and illegal hunting are threatening the imperial eagles. These large birds of prey are extremely sensitive to human-caused disturbance, especially int the nesting season. They even abandon their laid eggs when feeling unsafe in their nest. Because of that, even conservation biologist avoids the vicinity of nests.

Some kind of human disturbance could have happened around a nest on the area of the Bükk National Parks Directorate. Rangers noticed that the parents spend significantly less amount of time incubating their eggs. They finally decided to remove the egg in order to save it. The egg was replaced for a same sized wooden replica, to which the parents returned for a couple of times before abandoning it for good. The tree with the nest was capsized in a storm two weeks later; hence the intervention was a rather fortunate one. 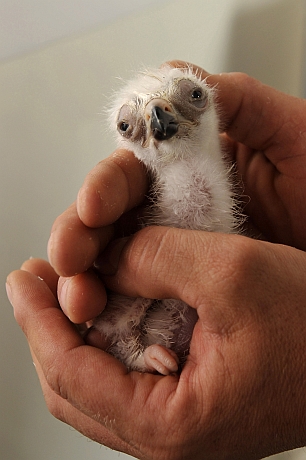 Gábor Czifrák removes the newly hatched chick from the
incubator at the Great Bustard Breeding and Protection Centre.
The hatchling will be put in a breeding eagle pair’s nest in
the Bükkk National Park. (Photo: Gábor Nedeczky).

The egg was transferred to the Great Bustard Breeding and Protection Center of the Bükk National Parks Directorate.  Fortunately the embryo was still alive.

After two weeks of incubation the egg has hatched. It took two days for the chick to completely take off the remnants of the eggs shell. She accepted the offered meat, and managed to survive the first few days.

We are planning to put her to an imperial-eagle’s nest where other hatchlings are being raised, when she reaches two weeks of age. Int he last years 3 of 4 attempts of such cross-fostering were successful.