Zero tolerance policy of bird crime in Europe and North-Africa

MME/Birdlife and the Ministry of Rural Development participated on the event, which was organized by the Bern and the Bonn Convention as part of a series of which the main issues was how the combat illegal bird crime.

The so-called “Bird Protection Week” was held in Tunis, May 27-30, 2013. It combined three events, the meeting of anti-poisoning, the one dealing with poaching and the conference of the bird conservationists of the Bern Convention.

The first had a detailed discussion about the problems of certain areas of illegal poisoning -including the use of agricultural pesticides, lead, and poisoned baits- and the possible solutions, which are the basis of the recommendation and a detailed action plan presented at the conference of the Bonn Convention. The conference dealing with illegal persecution of birds sized up the improvement in the past two years and established the creation of an action plan. 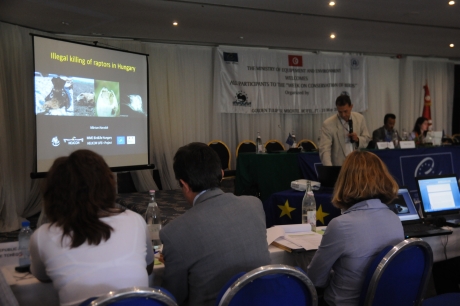 We presented the current situation and the steps taken in Hungary on these two conferences. Results and plans of the Helicon Life+ organized by MME were also described. We could also compare our efforts and experience with those of other countries in order to improve our activities. Besides national problems, it is equally important for us to see further international steps taken in countries along the main migration routes of birds, namely Cyprus, Lebanon and Egypt, where illegal trapping, shooting and other forms of persecution seriously threaten masses of the migrants. Our goal to support the conservation work in these countries as much as we can, so that zero tolerance policy can prevail in the region. The conference proposed that the Bern Convention and the AEWA should initiate an investigation regarding illegal mass killings in the Mediterranean. Tunisia signed the Raptor Conservation Memorandum of Understanding (MoU), under the Convention on Migratory Species (CMS). The group of bird experts of the Bern Convention held its meeting on the last day of the series of events. They evaluated the advancement of the Budapest Declaration, which deals with the issues of bird electrocution and collision. 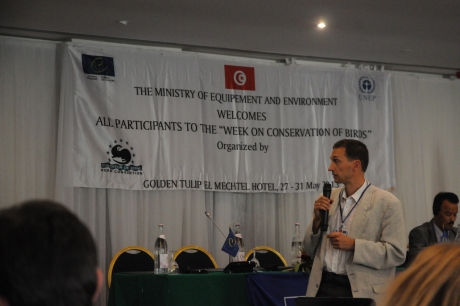 András Schmidt held a joint presentation of the MME and the Ministry of Rural
Development about the illegal killings in Hungary and about the
Helicon Life+ project (Photo: MME archive).

Participants confirmed the zero tolerance policy of illegal bird killings and endeavoured to act as a force in order to take effective, practical measurements.