The Raptor Conservation Department and the Monitoring Centre of MME are organizing the 13th National Eagle Census in collaboration with HELICON LIFE+ programme, national park directorates and other non-governmental organizations, as well. Its aim is to monitor the wintering numbers of birds of prey in Hungary.

There are several important wintering sites for Eagles in Hungary. Among them, the most numerous are the White-tailed Eagle consisting of lots of Northern European individuals. Majority of the immature, local Eastern Imperial Eagles spends the winter here, as well. Although, they are rare; Spotted Eagles and Golden Eagles occur occasionally in the Censuses.

In 2004, Raptor Conservation Department of MME initiated a programme utilizing uniform methods to monitor the numbers of wintering eagles nationwide, partly in well-known areas. More than 394 volunteers participated in last year’s Eagle Census covering up to 18.5% of the country and registered 986-1024 individuals of four different eagle species along with 8165 individuals of eleven other raptor species. 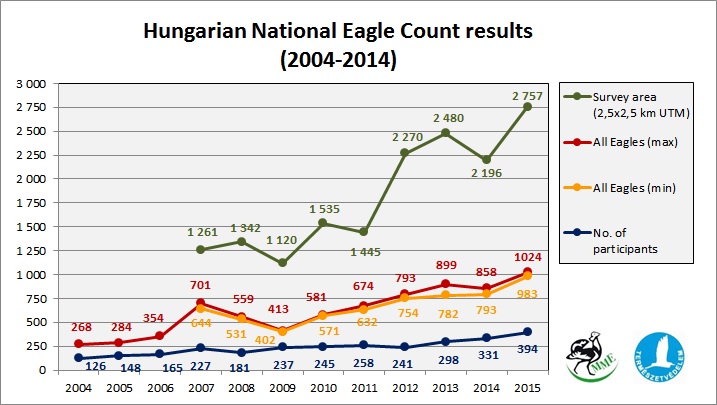 This week the international red kite winter count will also take place, of which the main aim is to map the major Western European  roosting sites and monitor the numbers of the species. Hungary will join the event through its Eagle Census, since participants need to register all raptor species seen. The returning red kite is still a rare breeding species in Hungary with a small and therefore very sensitive population of 4-10 breeding pairs. Collecting information on their wintering habits is crucial in their protection.

The 2nd Eagle Day, core event of the 13th National Eagle Census, will be held in the Jászberény Zoo on Saturday, January 16, 2016. MME, Hortobágyi National Park and the Jászberény Zoo started a tradition last year with the 1st Eagle Day and will continue it this year as well. Goal of the event is to draw people’s attention to how rich Hungary is in raptors, and to the conservation of the imperial eagle. Here you can read the detailed itinerary of the 2nd Eagle Day >>

Please make sure you fill in the datasheet the way suggested by the instruction booklet!

We advise you to print the “User’s Guide” besides the “Worksheet” datasheet (both can be found in 1 page A/4 format).

Please, send your data to the monitoring@mme.hu email address after the survey, as soon as possible but not later than January 18th midnight, in order to avoid last years’ delays.