Among several projects, the HELICON Life project also shared its experiences at a recent platform meeting in Athens.

The event's host project, 'Return of the Neophron' (LIFE10 NAT/BG/000152), is focused on improving the conservation status of the Egyptian vulture (Neophron percnopterus) in Greece and Bulgaria. Together, these countries account for almost 70% of the Balkan vulture population (62-71 pairs). The project aims to secure the protection of all the remaining pairs found in 15 Natura 2000 sites in Greece and in 12 sites in Bulgaria. Major threats include a high mortality rate caused by poisoning and contaminated food, amongst others. 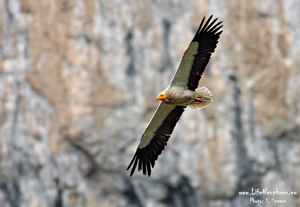 Project coordinator for Greece Victoria Saravia said a network of stakeholders has been established to raise awareness of the problem. These include private individuals such as farmers and hunters, as well as forestry services, the police and enforcement agencies. The project has tried to help provide alternatives to poison, for example, shepherd dogs and electric fences for farmers and livestock breeders. "The creation of anti-poison dog units was another important action," Ms Saravia noted. In addition, Return of the Neophron is supplying kits to the forestry services to collect evidence of poisoning in order to improve evidence collection for prosecution.

The project, which runs until December 2016, is expected to stabilise the Egyptian vulture population in Greece and Bulgaria, reducing deaths caused by illegal use of poison in the Natura 2000 sites and providing significant amounts of safe food through a series of delivery methods.

Several LIFE projects are using dogs in the fight against wildlife poisoning, such as 'ANTIDOTO' (LIFE07 NAT/IT/000436), which was completed in 2014, and its follow-up project 'LIFE PLUTO' (LIFE13 NAT/IT/000311). ANTIDOTO aimed to achieve effective preservation of large carnivores - wolves and bears - and various species of scavenger raptor, in areas of Italy and Spain where they were under threat, particularly from poisoning. The project set up Anti-Poison Units to oversee reductions in the use of poison against large carnivores and raptors in Gran Sasso National Park and Aragón and to encourage the adoption by Italian national bodies of measures to prevent such poisoning.

The projects' representative Anna Senarini said ANTIDOTO enabled the creation of the first two anti-poison dog units in Italy, operating in Gran Sasso National Park. Between September 2010 and March 2014, these units carried out over 200 inspections. They have continued operating after the project's end thanks to special financing from the Ministry of Environment. LIFE PLUTO will enable the creation of six additional anti-poison dog units, run by the Italian forest service. Together, the eight units will operate over all of central and southern Italy, covering 11 regions in total. They will carry out routine inspections in the areas most at risk, as well as urgent inspections once a poisoned carcass or bait is found, in order to clear the territory of other poison.

Ms Senarini added, "One of the main weak points in the fight against the illegal use of poison is lack of expertise and knowledge." Therefore, other ANTIDOTO project actions included an information campaign and training on strategies to prevent and control illegal poisoning in Gran Sasso and Monti della Laga national parks, Andalusia and Aragón through seven courses for targeted stakeholders (e.g. forestry staff, veterinarians and technical officers of public administrations).

'HELICON' (LIFE10 NAT/HU/000019) also has a dog unit, formed in 2013, which sometimes assists the police in carrying out search warrants, according to project manager Márton Horvath. The overall objective of HELICON is to maintain the increasing population trend of the eastern imperial eagle (Aquila heliaca) in Hungary by significantly reducing non-natural mortality rates. The eastern imperial eagle is a globally threatened species, with a total population of only a few thousand breeding pairs. Hungary is home to the largest population in the EU, however the eagle's favourable conservation status there is threatened by an exponential increase in deliberate killings, especially by poisoning. 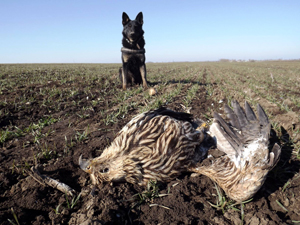 The project aims to provide safe feeding places and to improve the public's understanding of the importance of imperial eagle conservation and the possible consequences of persecution incidents. Another goal is to raise stakeholders' awareness about the overestimated impact of raptor species on game populations and about alternative eagle-friendly game management methods. HELICON also wants to increase the chance of detecting illegal activities and imposing criminal sentences. As a result of these actions, it is hoped the Hungarian breeding population of eastern imperial eagles will increase by more 20% during the project period and that the number of deaths due to persecution will decrease.