Meanwhile experts are making all the efforts to monitor and protect wintering birds of prey during the 13th National Eagle Census, others are poisoning them either incidentally or purposefully.

Although, only three weeks have passed in 2016, the tally of poisoned birds of prey has almost reached last year’s total. In three different cases of purposeful raptor poisoning, altogether 40 common buzzards, nine ravens, one tawny owl, seven foxes, one dog and one cat alongside with 19 treated baits were discovered in three counties. 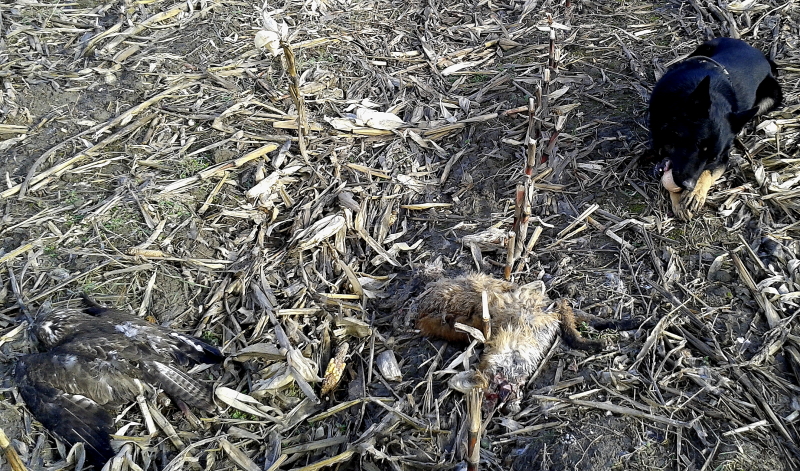 A dead common buzzard, a fox and the finder, Falco can be seen at one of the crime
scenes in January 2016. (Photo: Gábor Deák).

MME’s special detection dog-unit, in collaboration with the ranger service of the three national park concerned, plays an important role in discovering carcasses and small baits in particular, thereby helping police work as well. Partly as a result of this, in one specific case police was able to search the house of the suspect immediately and find the illegal chemicals used for the poisoning for the first time in Hungary. Concerned police departments launched investigations in all three cases to find the culprits.

In 2014, we were hopeful because “only” 15 protected birds –and not one imperial eagle among them- perished due to poisoning after a ten-year long poisoning rampage leaving more than 150 eagles and 400 other raptors dead as a result.

Then 2015 came, and number of reported poisoning cases increased again. Altogether, 61 protected birds died, among them five imperial eagles and seven white-tailed eagles. A major breakthrough was that the police was able to bring four suspects to trial.

Although, no eagle was found poisoned so far this year, the extreme number of cases gives cause for concern, therefore the national park ranger service, police and MME’s detection dog unit will patrol the countryside more frequently.

Statistics of cases to date: